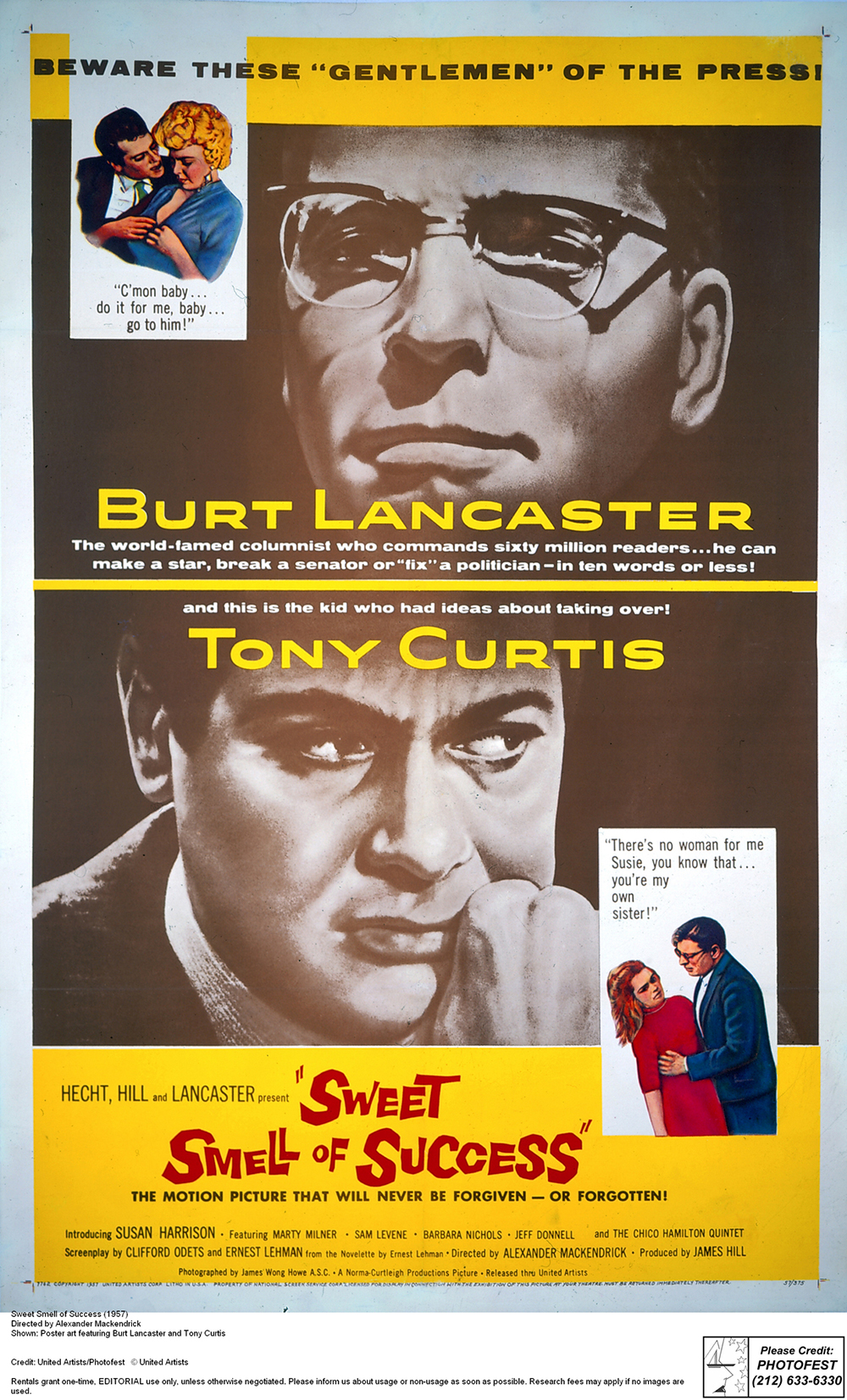 Plot: Columnist J.J. Hunsecker can make or break a career with a single newspaper item, and has no qualms with so doing. Press agent Sidney Falco aspires to be the next Hunsecker and has cast off morals to do Hunsecker's bidding, including breaking up the romance between Hunsecker's sister and a young musician. An excellent, memorable script highlights this look at the symbiotic relationship between two hearts of darkness.

Smarmy, selfish, and self-righteous journalists ruthlessly tear down others with their written words all for the sake of name recognition. Essentially, the film is a big collection of scathing dialogue delivered in rapid succession. The tiny amount of story is un-important. It's more of a background to the repetitive angry smack talk that drives the whole piece. The creative word choices flow naturally between the cast, but it does get very tiresome. That's the film's only major offering. There's not nearly enough investment in the dilemma between the characters. Nothing to care about amidst the sinister ideals.

Similar to The Bad and the Beautiful, a film dedicated to exploring the depths of human cruelty so thoroughly that it becomes fascinating to watch. The dialogue is razor-sharp and darkly witty, flawlessly executed by such a strong cast. Somehow makes a cast of unlikable characters deeply watchable.

The scent isn't what you'd expect....

The formidable 1957 drama SWEET SMELL OF SUCCESS is ripe with rich dialogue and a scathing sense of humor against a dark backdrop of NYC that is corrupt and seedy.
Burt Lancaster and Tony Curtis trade their matinee idol personas for two of the most reprehensible and loathsome villains to appear in a film noir from Hollywood's Golden Age. Lancaster is J.J. Hunsecker, the most powerful columnist in America who is misanthropy incarnate that holds everyone else in scorn and contempt. His servile lackey is press agent Sidney Falco who against his own sense is available at Hunsecker's every whim and dirty deed.
His latest task is orchestrating the breakup between Hunsecker's young sister and a kindhearted jazz musician. It's a mission filled with sharp twists, snappy dialogue, and an …

A typical "talkies" flick with a lot of moving around. Wonderfully scored coupled with amazing performances. Screenplay was fair with lines: "In brief, from now on, the best of everything is good enough for me." "Dallas, your mouth is as big as a basket and twice as empty! " Sweet Smell of Success maybe popular and recognized, for this rater there just no immediate impact and interesting figures to enjoy from. For media personel related movies, this critic prefers Network, …

"Sweet Smell Of Success" by Yojimbo

This pitch black hearted noir was something of a flop on its release, and it's not difficult to see why. Not through lack of quality, but rather the fact that its unrelenting cynicism and bleak outlook is certainly not for the faint hearted. Tony Curtis turns in easily his best performance as Sidney Falco, an obsequious press agent who is perfectly willing to sell his soul to get on top, and Burt Lancaster is similarly superb, brilliantly cast against type as a cold-hearted tyrant (even describing an attack on his character as an attack on his country, the cry of despots throughout the ages) who controls all around him through contemptible manipulation. The core of the film is the creepily ambiguous relationship between he and his sister; at one point he refers to her "apron strings", an …

100 Best Movies of All-Time by truckturner

Best Movies of the 1950s by truckturner

No posts have been made on this movie yet. Be the first to start talking about Sweet Smell of Success!