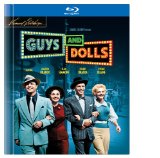 Plot: It is a great movie about mobsters in the mid 1950's just trying to get a lousy craps game together it stars Frank Sinatra and Marlon Brando as the two mobsters

I thought this movie was great. It was funny, entertaining, and charming.

i love this movie because of the old time feeling that it brings. there's singing and dancing, and is just a sweet story. it's got a great cast that is hilarious!!

No posts have been made on this movie yet. Be the first to start talking about Guys and Dolls!