Absolutely astonishing. I will not water this review down with superfluous talkings of what it contains. If you want the most amazing viewing experience you've ever seen at home on a Blu-Ray player, get this. It was filmed on 70mm celluloid and upgraded to 8k. 70mm film. 70 If I was living in the Soylent Green world, and I wanted to commit suicide like Edward Robinson, I would request this as my outgoing visual. This is why I love film. 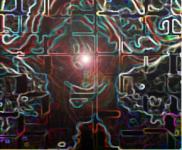 Ron Fricke's meditative opus on birth, life and death is epic filmmaking without banality. Sheltered lolly-gaggers that believe 'Finding Nemo' to be a visual odyssey won't find an ounce of CGI in Fricke's celebration of culture, diversity and global evolution. Natural settings, ancient ruins, dense cities and blazing oil fields are captured with a richness and scope that, driven by Michael Stearns' evocative soundscape, is at once grandoise and poetic, generating a cinematic intensity that has influenced many a documentary since. In the increasingly shrinking individuality of contemporary living, 'Baraka' is a panoramic chain of harmony, purpose and inevitability - ours is a world that is larger than its parts, yet somehow smaller than the spiritual forces that bind it.

No posts have been made on this movie yet. Be the first to start talking about Baraka!