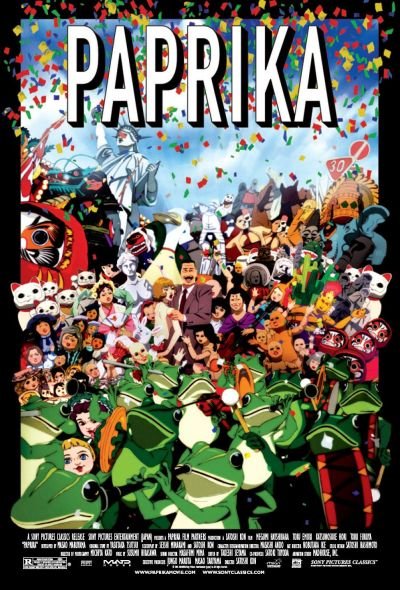 Plot: A new device allows scientists to delve into a patient's dreams to help them analyze their problems, but when a techno-terrorist steals the new technology no one is safe, and soon the line between dreams and reality begin to blur. -- Chris Kavan

This is a wild animated ride that plays constantly with perceptions of reality in an inventively visual way. Christopher Nolan acknowledged the influence of this film on Inception and you can definitely see the parallels. It's a striking thrill ride that passes by all too quickly.

A disarmingly haunting and mesmerizingly wacky anime about dreams merging into relaity; you may not know what's going on, but the images can speak for themselves. Final Grade: B+

I really love in this order 1. Movies about dreams, 2. Dream sequences in movies, 3. Anime/manga. So, I'm just giving you the kind of recommendation that you would need for decide if watch it or not. For momments it has a non linear argument and imaginery/plot. But is not that difficult to follow and you'll be surprised and pleased by the result. I'd say that is a must see for any anime lover.

"The Internet and dreams are similar. They're areas where the repressed conscious mind escapes."

Not for children or the faint of heart.

'Paprika' doesn't hesitate when descending into a trippy nightmare with it's untamed imagination. It's like an anime comic book coming to life in a Salvador Dali style of surreal. Even the square frame can't contain the madness of the dreamworld.

Once the song 'Susumu Hirasawa - Parade' started playing, I knew that things were gonna get weird, real fast.

However, not to say the movie doesn't hold any beauty in it's dreamlike setup. All colors and animation aside, the beauty itself comes from the imagination and the amount of detail Satoshi put into the movie, which was mesmerizing.

The soundtrack's great as well. It's so full of energy …

Paprika is Satoshi Kon's most polished work to date, though Perfect Blue will undoubtedly remain his most curious and disturbing analogy of blended realities. The animation stands at the forefront here with dreams able to manifest in the real world (thanks to superior technology falling into the wrong hands). Thus, the viewer gets a parade of wind-up robots, frog princes, rockets, Godzilla sized mothers, and a bevy of things that should not be, which put any hallucination dreamed up by Disney to shame. This is the surface of the film that many will write off as pure kinetic stream of thought.

Digging deeper we find Kon developing an enduring and genuine …

The Reality of Dreams

Having seen Satoshi Kon's previous films (and TV series) I knew how much he likes to mix dreams and reality. He has been working on a variation of the theme since Perfect Blue and now, with Paprika, he has finally reached the pinnacle of his vision.

The best way to describe the animation is stunning. It's vivid; it's imaginative and it's wholly engaging. From the opening scene in a circus, traveling through a dream sequence and the fantastic opening credits you know you're in for a visual treat. Not only does the film look great, it sounds great too. The soundtrack has a techo-noir feel that compliments each scene - especially the random dream parade.

The biggest complaint you will find on Paprika is that the story doesn't make enough sense. When dealing with dreams and reality, …

No posts have been made on this movie yet. Be the first to start talking about Paprika!