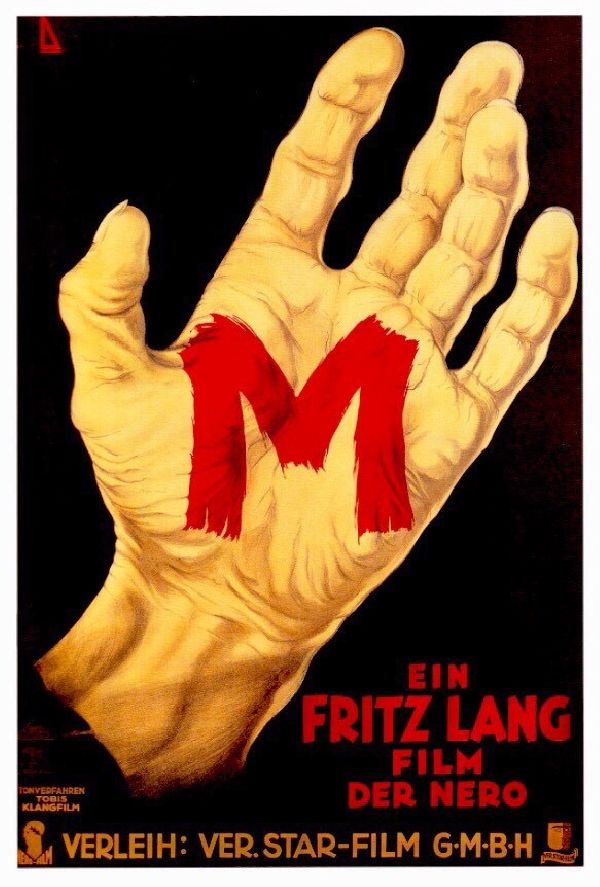 Plot: When the police can't solve a mystery, others are brought in to join the search.

Fritz Lang's "M" oozes with paranoia as it shifts focus from the panicked residents of a German city to the compulsive killer terrorizing them. With its darkened style, psychological undertones, and gripping suspense, it's not surprising that this early cinema classic is cited for its influence on American noir.

Director Fritz Lang does a lot with very little, using creative cinematography, shadows, and dramatic tension to paint a story of subtle terror and monstrosity. Peter Lorre is the right actor for the role of the grotesque killer and the film, for its age, is a lot more frightening and significant because of what it does show than what it does.

A greatly directed and absorbing slow thriller. There are some suspenseful moments in the second half that lead up to a confrontational climax in which some moral questions are raised. It's all topped off by a memorable performance from Lorre as the child murderer.

M is a movie I discovered by just typing 'm' into the YouTube search bar.
What started out as a seemingly unconscious act led to my viewing of one of the best movies I had ever watched.

M. Just that title sounds so mysterious, doesn't it?
Well, I can assure you that this movie is loaded with mystery and suspense.
Fritz Lang is known for directing the early sci-fi movie Metropolis, but I think his true overlooked film is M.
The way he directed it allowed so much insight into such a controversial premise. A child murderer in Berlin, hunted by the police and eventually Berlin's flustered criminal gangs.
There is something demented about the way the movie looks. You don't know what, but it feels twisted all the way through, like it is refusing to tell you …

Had some blurry shots and shaky camera angles that wasn't really intended. Everything seems to move in slow motion. The screenplay had some humor in it. Peter Lorre was brilliant, not enough could be said with the rest of the cast. Had many thrilling moments and usage of glass. Had some interesting lines from the film: SchrÃ¤nker - "We just want to render you harmless. That's what we want. But you'll only be harmless when you're dead." Hans - "It's there all the time, driving me out to wander the streets, following me, silently, but I can feel it there. It's me, pursuing myself! I want to escape, to escape from myself! But it's impossible. I can't escape, I have to obey it. I have to run, runâ¦ endless streets. I want to escape, to get away! And I'm pursued by ghosts. Ghosts of …

The M stands for Masterpiece

An amazing piece of cinema that even though is 75 years old, still manages to evoke a powerful response. Even today you will be hard-pressed to find a more compelling story dealing with crime - especially as one as abhorred as a child-killer.

Pretty much any film dealing with a search for a killer - think Se7ev, Silence of the Lambs, etc. owes its existence to a chance that Fritz Lang took with this film. Peter Lorre ranks near the top of the villain category with his portrayal of the murderer that is so evil, not only are the cops after him, but so are common criminals for marring their image.

The tension is palpable throughout M - whether it's the creepy whistle of Hall of the Mountain King or a deadly game of hide in seek in a darkened attic - it never lets. The use of shadows …

Top Films of 1931 by Neobowler

No posts have been made on this movie yet. Be the first to start talking about M!