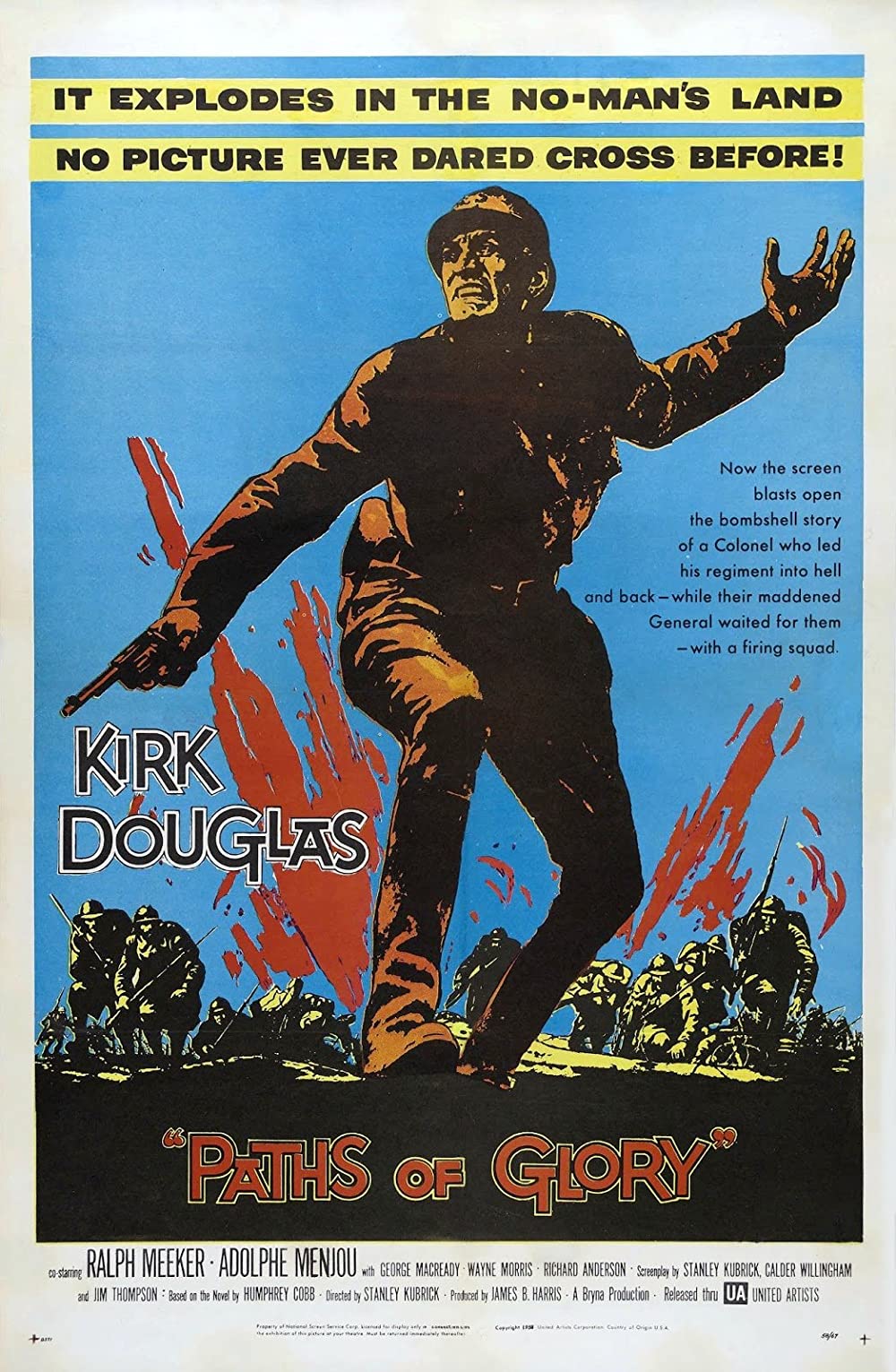 Plot: During World War I, soldiers refuse to fight as it appears certain death. The superior military decides to make an example out of them while one man (Douglas) defends them.

Some war films are thought-provoking. Others are tearjerking. "Paths of Glory" is amongst the greatest war dramas ever made for being both.

This movie takes place During World War I, soldiers refuse to fight as it appears certain death. The superior military decides to make an example out of them while one man (Douglas) defends them. Stanley Kubrick the director of such dark and gritty movies and this movie is one of them. The movie has outstanding and the directing is brilliant, But there are some scenes that felt a bit slow in parts.

This is just as brutal and unflinching as Full Metal Jacket, but Kubrick gives this a much more subdued touch - yet one that is no less powerful. A lot rests on the shoulders of Kirk Douglas, and he does an excellent job. It's a story that should be presented every generation.

Kirk Douglas is amazing in this film. People have argued that his character is underdeveloped, but I find him to be perfect that way. You don't know much about him, but you get the sense that he's a cold man of war, who, when everyone else ducks during an explosion in a trench, will continue walking tall. That is the majority of his character until he finds out the men who stayed in the trenches are to be shot and he really let his principal, emotional side show.
The acting and the overall filling of the characters was also amazing. There are so many likable and so many unlikable characters, who simply use other soldiers and each other for their own benefit, when the main purpose of the war is for justice.

While this was a very powerful movie, I felt it needed more in certain scenes. …

"There are few things more fundamentally encouraging and stimulating than seeing someone else die." 701's RÃ©giment Colonel Dax (Kirk Douglas) is challenged at court by the insensitive strict General Mireau (George Macready). Private Ferol (Timothy Carey), Private Arnaud (Joe Turkel) and Corporal Paris ((Ralph Meeker) were chosen to be court martial-ed. Beautifully scored with solid acting from all the cast. Definitely one of the best screenplays portryed on screen from the director with quotes: General Mireau: "Were not talking about the past. Were talking about the present." Col. Dax - "I can't believe that the noblest impulse for man - his compassion for another - can be completely dead here. Therefore, I humbly beg you... show mercy to these men." Father - "Death comes to us …

Not a great war movie

For a movie that is rated so highly I feel disappointed.
Neither was it a great war movie, nor was it a great movie about justice/injustice (instead see 12 Angry Men).
Without the acting of Kirk Douglas the movie would have been a flop, the performance of the rest of the cast was below average.
Artillery constantly landing on friendlys without casualty (at least initially). The attack was a surprise-attack at sunrise so I can only imagine the artillery landing on the soldiers was from the allied artillery regiment and not the Germans. WTF. I know Artillery is known to drop short but seriously.
They should have had a scene of the men writing their swarn testimonies against the General. Obviously they were pissed off, they should have shown that.
Would have been nice to see the …

No posts have been made on this movie yet. Be the first to start talking about Paths of Glory!