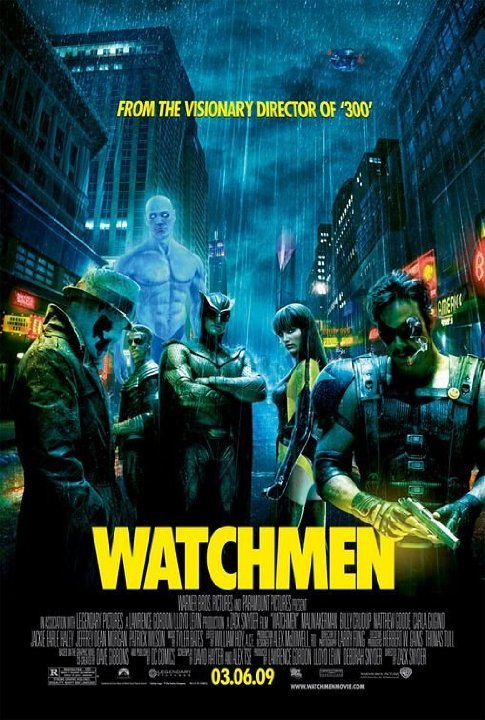 Plot: Based on the graphic novel, Watchmen takes place in an alternate 1985, where costumed vigilantes have been outlawed except those working for the government. When a masked veteran is murdered, heroes unite to find the killer, but as the truth is revealed a far more sinister plot is uncovered. -- Chris Kavan

A burning pile of pulpy, stylistic garbage, Zack Snyder's adaptation of the popular graphic novel has an undeniable niche of fans, but I'm having none of it.

Watchmen takes place in 1985, where costumed vigilantes have been outlawed except those working for the government. When a masked veteran is murdered, heroes unite to find the killer, but as the truth is revealed a far more sinister plot is uncovered. this movie has stunning visual effect's and Jackie Earle Haley, Jeffrey Dean Morgan, Patrick Wilson are the only three good actors in the movie that rest of the actors are mostly forgettable or bad.

I really like Zack Snyder so I've been wanting to see this for years. I might have been expecting a little more, but Watchmen does not disappoint at all. It's not even close to being perfect, but it certainly has MANY good things going for it...

The titles of the night.

Not all are admirers of Zack Snyder's work, but the ones that are rave about his supposed flawless visual style and method of storytelling in his visceral comic book film adaptations, which stay extremely close to the source material. And it seems I am having a good week, as I for the second time appreciate a film more after a second viewing.

What makes Watchmen fascinating is its devotion to the world it creates. It is directed (as I mentioned before) flawlessly …

This is a review written within the larger perspective of the mythos of the Watchmen universe. On the surface, Watchmen is a visually-arresting, thrilling, and strikingly unique super hero film. Until you read the graphic novel source material and realize how vacantly short the film adaptation falls in terms of tone and theme. Watchmen nails a lot of the visuals and Zack Snyder has a kinetic way of choreographing action powerfully. (Though a lot of the film's best stills are ripped directly from the plates of the graphic novel; so a lot of the credit for the film's visuals is due to Alan Moore.) In content, however, the film struggles and doesn't quite know how to portray the novel's complicated and crucial themes of corruption, redemption, and postmodern responsibility in a decaying …

Based on the Alan Moore graphic novel, Watchmen is set in an alternate reality where costumed "heroes" were created as state-sanctioned vigilantes to fight the mob and who helped the US win the Vietnam war and get tricky Dicky elected for 5 successive terms as president. Another superhero movie with a difference it sticks firmly to the moral grey areas, showing these "heroes" as human and fallible; who is the more heroic, a violent sociopath obsessed with punishment through vengeance or an emotionally detached self-appointed guardian willing to sacrifice millions of lives for "the greater good"...? The core of the film is provided by charismatic anti-hero Rorschach's Noir style investigation into the murder of fascistic black ops hero The Comedian, set to the backdrop of a skewed history …

I agree, it's not a film you can sit down and watch lightly, but I think it works well.&amp;nbsp; It's good to see an alternative Super Hero movie.&amp;nbsp; Rorschach is by far the best character, poor guy!

I'm not a big Comic book fan &amp;amp; I should've read the reviews before&amp;nbsp;watching it, but I took a risk and watched it last night thinking it was going to be&amp;nbsp;an action movie along the lines of Iron Man or The Dark Knight.&amp;nbsp;But of course, I was wrong, to an&amp;nbsp;extent.&amp;nbsp;It is Rated R for&amp;nbsp;good reason.&amp;nbsp;Lots of nudity, sex scenes &amp;amp; violence,&amp;nbsp;so definitely DO NOT take any&amp;nbsp;kids in there. My favorite character was Rorschach who dealt my favorite line out of &hellip;

Hey there smoochers! Yeah, read the squid was out on the ol' net back in November. Since ya' don't want spoilers I won't say nuttin' 'bout nuclear bombs... toodles honies!

The new issue of Entertainment Weekly has a good cover story on the upcoming release, including a piece of information that shocked me: the &quot;giant squid&quot; is not in the movie in favor for something different. Â I'm avoiding Internet spoilers, but hmmm, I wonder if this different thing will have the same impact.

the trailer is really amazing..