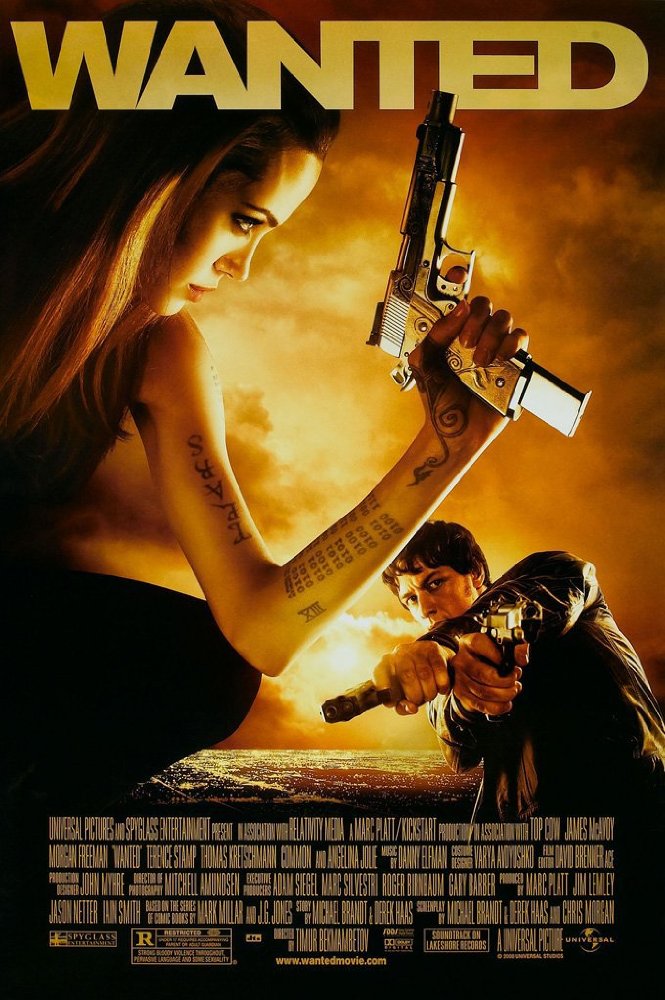 Plot: An average Joe who is barely functional in society - he goes to work, doesn't care about much, and has zero ambition. He is approached by a group of people claiming to be trained in some form of assassin-ism. Through the help of others, he is amazed and wowed to believe that he can be one of them - a secret justice enforcer.

A peculiarly nihilistic actioner, "Wanted" is full of shootouts and inventiveness, while also examining the nature of human fate.

Great action film which doesn't take itself too seriously. A mild mannered office geek becomes a supernatural skilled assassin and takes revenge on those who wronged him. It deviates a bit from the source material, but this is one of those rare cases where a comic book adaptation is actually superior to the book itself.

Most stupid, not most wanted.... Bullets crushing in mid air, aiming and bending the trajectory of a bullet by sudden move of the arm is some dubious imagination. Circle of death is a metaphore for the crew that only run for some money....

A downtrodden working stiff who wishes he had more from life discovers one day that he is a super-powered assassin who can bend the laws of physics. Hmmm...I'm pretty sure I've heard this somewhere before. Not to mention the "phew it was only a dream...oh wait, no it wasn't!" scene and the beautiful stranger who becomes his personal Yoda. In fact the entire plot is utterly ludicrous ("Loom Of Fate"? Riiiight...) and the majority of the film is basically the Rocky montage done in the style of The Matrix while McAvoy whines and howls to the point of distraction. There are some slickly directed set pieces and it does have its moments, but they're all just on a very superficial, eye boggling level. In its favour it never gets dull and I actually enjoyed it first time around, but if you …

Wanted, when it boils down to it, is basically a gun fetish movie. Somebody else on here pointed out that it reminded him of Fight Club, but couldn't put his finger on why. Here is why: the main character of Wanted pretty much lifted the narrator of Fight Club and inserted him into a sub-mediocre film about guns.
So the plot is: the narrator from Fight Club (James McAvoy) realises his life sucks just in time for Angelina Jolie and Morgan Freeman tell him he stems from a long line of assassins who kill people because THE LOOM OF FATE tells them to, and that his life doesn't suck anymore. He undergoes some training where he learns to curve bullets because that's cool or something? Whatever. In any case, he basically gets given a gun and then he feels like an empowered man because he can …

Wanted is a Highly Energized and Absolutely Well Done action film. Director Timur Bekmambetov has made a well paced action ride that is entertaining from the very start to the very finish. The talented James Mcavoy is well chosen for the lead, giving a solid seriocomedic performance. He is in good company with Angelina Jolie giving a good and (of course) sexy performance as one of Mcavoys fellow assassins and Morgan Freeman giving a surprising mellow, yet just right performance as the man in charge. The story is good, The screenplay is great, The cast is perfect. The Special Effects are mind-blowing using the same idea of slow motion that The Matrix created but doing it much better. This film is great fun and the good thing is, it doesn't take itself to seriously.

No posts have been made on this movie yet. Be the first to start talking about Wanted!