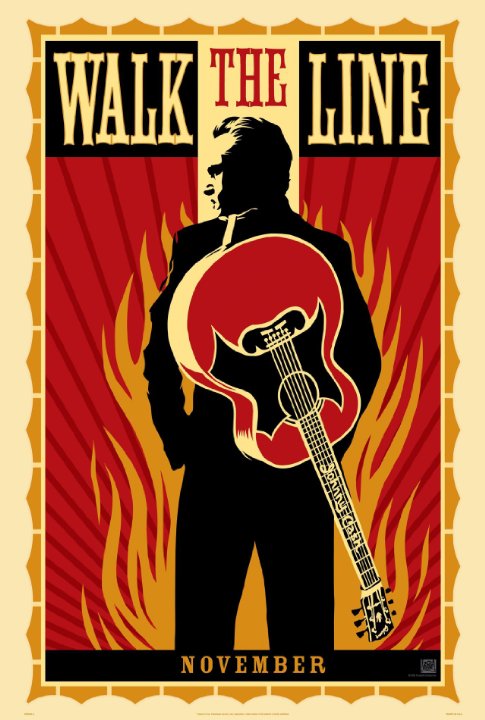 Plot: The Biography of music star Johnny Cash follows him as he spends time in the Korean War, to the time he spends in rehab in his later life.

Joaquin Phoenix's portrayal of the country music legend is career defining, and completes this understated biopic.

Proving that his method actor ways are successful, Joaquin Phoenix disappears into the iconic role of Johnny Cash. His presence commands every scene, which is to the film's benefit, as it falls plague to the common biopic error of appearing too episodic. And, of course, those songs...

Johnny âJ.R.â Cash (Joaquin Phoenix) and his band auditions for Sam Phillips, the owner of Sun Records. After Sam gives a little advice in terms of writing songs, Cash plays an original that he wrote. They record a deal and Cash becomes an instant hit. Johnny Cash and the Tennessee Two tours and meet the charming and humane June Carter (Reese Witherspoon). J.R. leaves Vivian Liberto and his kids and relentlessly pursues June. One of the best lines from the film: June - "You are not nothin'. You are a good man, and God has given you a second chance to make things right, John. This is your chance, honey. This is your chance."

Witherspoonâs stunning performance was well rewarded while Phoenix held his own and was positively recognized. Not only was this film about the story of …

James Mangold has proved himself as a diverse director, tackling crime and corruption within the police force (Copland), angst and suicidal tendencies amongst a group of female patients of a mental institution (Girl, Interrupted), and a horror whodunit mystery located at an isolated motel (Identity). Now, Mangold offers up the biopic genre which has recently been showcased as a guaranteed Academy highlight.If ever there were a case of two performers taking over a film and making it their own this is it. Walk the Line is elevated by two of the most brilliant performances you could ever hope to see from Joaquin Phoenix as the legendary Johnny Cash and Reese Witherspoon as June Carter, Cash's partner on stage and eventually offstage as well. The love Johnny Cash and June Carter had for one …

"The Man in Black" lives on in a good biopic

This is the true story of one of the most beloved acts and couples in Country music -- "The Man in Black" Johnny Cash and the love of his life, June Carter-Cash.

I have to admit, biographical movies are not my favorite types of films. I watched this just because it was on my Yahoo Movies recommendation list, and I have to say I was pretty impressed with it.

Joaquin Phoenix and Reese Witherspoon are excellent as Johnny and June. Phoenix nails Johnny's mannerisms on stage, and starts to really look like "The Man in Black" as the movie progresses. Witherspoon was so good at her performance that she won the Oscar for Best Actress in this film.

You hear some of Johnny and June's biggest hits from early in their careers together and as solo artists. What should surprise you is that …

No posts have been made on this movie yet. Be the first to start talking about Walk the Line!