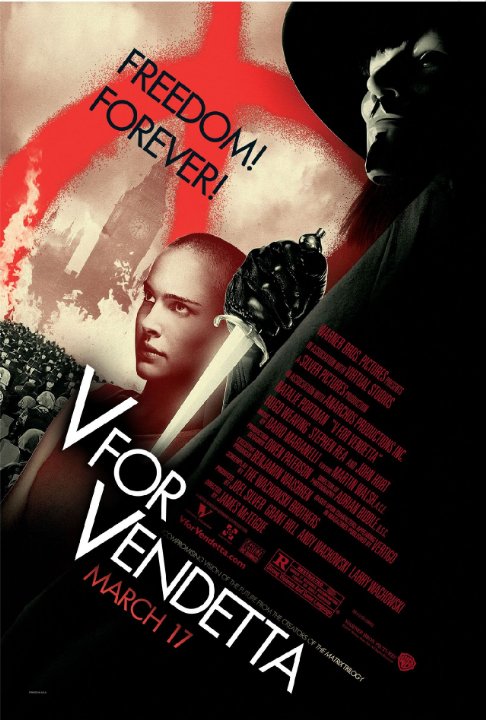 Plot: A terrorist freedom fighter, who fights against conformity, finds an unsuspecting ally in his fight to free his country. Takes place in the near future.

Pulling together elements of "A Clockwork Orange," Batman," and some of the best noir & political thrillers, "V for Vendetta" is more than just fighting words.

Alan Moore's graphic novel of a terrorist sabotaging a Fascist regime in futuristic England delivers on the action. It is also that rare action thriller which has a thoughtful political agenda much in the style of The Matrix; The Wachowskis actually helped produce V For Vendetta. Hugo Weaving gives his best performance as the intelligent swashbuckling freedom fighter known only as V. Natalie Portman is good as his accomplice and confidant. John Hurt is a lot of fun as a despotic tyrant.

"The only verdict is vengeance; a vendetta, held as a votive, not in vain, for the value and veracity of such shall one day vindicate the vigilant and the virtuous." V for Vendetta is a dramatic and powerful piece of fiction that says so much that it's a shame critics miss understood it. P.S. Hugo Weaving, I love you man.

This is why the Wachowskis should write screenplays more often. Man. That was awesome.

KingInTheNorth mentioned in his review that the film was reminiscent of Children of Men. While Children of Men is much more apocalyptic and tragic, the general atmosphere of a dystopian Britain is there, like A Clockwork Orange. A corrupt society.

The editing in the movie is amazing. The whole film feels like a juxtaposition of action, story and past events, although barely anything is shown in flashbacks.
James McTeigue made one of the best debuts possible, by letting his style combine with the excellent tone of the film. It's just a marvel of modern filmmaking, where a little bit of everything came together and it just worked.
The script shares much of the same newfound faith in the …

To all the guys who have seen, and liked "Children of Men". This movie has quite similar future visions. It is also located in Britain, a future not that far and the other countries seem to be messed-up.

We get very early introduced to the main chararcters in the movie, which makes us lose some (but very less) build-up. But by keeping on watching, everything gets clearer, the build-up stronger and the characters better.

The movie has a very obvious message, but who cares? The message underlines the meaning of the movie, no matter if it is obvious or not. To keep on going with the script: There are so many quotable lines in there, you don't even know what is the best. "We don't invent the news- the government does- we just tell them"

Hugo Weaving. My word Elrond, you are …

"V For Vendetta" by Yojimbo

In a great britain of the near future, a right wing politician has swept to power on the crest of a wave of Daily Mail inspired conservative nazism. Using a combination of spin and propaganda through the media, he has convinced the populace to sign away their rights and liberties until one masked man decides to fight back. Thank God I don't REALLY live in a Britain like that...! I was expecting great things from this film, its combination of politics, imagery and stylised action is exactly the kind of thing that appeals to me. Unfortunately, this level of expectation can often lead to disappointment, but what I was presented with here was a thoughtful, intelligent and wonderfully written "superhero" film in which the hero has no special powers or magic tricks; he is just an ordinary man …

No posts have been made on this movie yet. Be the first to start talking about V for Vendetta!