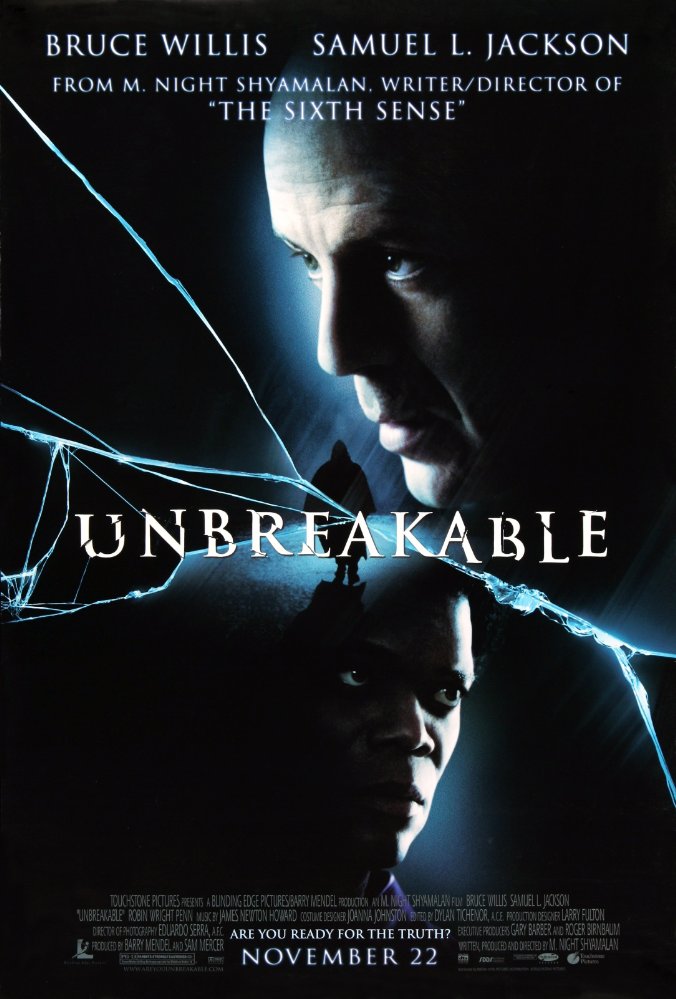 Plot: After being the sole survivor of a horrific train crash, and with nary a scratch, a man is approached by a stranger with a rare bone disease who deduces that he is a real-life super hero.

After being the sole survivor of a horrific train crash, and with nary a scratch, a man is approached by a stranger with a rare bone disease who deduces that he is a real-life super hero. Not as good as the brilliant thriller from 1999 the six sense.

Aside from the Sixth Sense, this is Shyamalan's best work. Bruce Willis and Samuel L. Jackson play interesting opposing characters in a unique and understated take on the super hero mythos. The film doesn't need explosive special effects or spandex costumes to play on themes of good vs evil and the film is terrifying and atmospheric throughout.

An obsessive comic book store owner is convinced that the sole survivor of a train wreck has special powers meant for a greater purpose. M. Night Shyamalan has long since exasperated me with his endless insistence on relying on rubbish plot twists to hang his entire films upon, but Unbreakable like The Sixth Sense before it, reminded me just why he was such an exciting prospect at the time. It has an intriguing concept exploring the idea that super powers may in fact be real, making for a low key but cerebral super hero film that is still quite unusual to this day. It has his keen eye for attractive visuals and subtle, nicely judged direction which aided by some fine performances makes for an intelligent and rather unique film. Unfortunately at the end, MNS's penchant for the plot twist …

A story of a frail comic book art gallery owner Elijah Price (Samuel L. Jackson) and invincible yet lost security guard named David Dunn (Bruce Willis). The 2 men met at Elijahâs gallery when David saw a calling card left in his car. Dunn brings his son Joseph (Spencer Treat Clark) to the gallery and is influenced by the theories of Elijah. Born with Type I osteogenesis imperfecta, a rare disease in which bones break easily, Elijah is treated by Davidâs wife Audrey, whose marriage is deteriorating. In certain cases, David has survived a car crash and train wreck unscathed. He tests his strength by lifting more than 300 pounds with Josephâs assistance; he was able to detect a person carrying a gun and is able to detect evil doers by a bump or through touch. After Elijahâs …

A PERFECT FILM THAT DELIVERS THE GOODS.

I must say im a huge fan of M.Night Shyamalan,no matter what people say about him.he has proven to me that not only does he know hoiw to creat good films,but creat them in ways that intruige you in many ways.now this film may not be his best,but it's certinaly not one of his bad ones.Bruce Willis and Samuael L.Jackson are perfect together in this film.the drama and mystery in this film unfolds like cubic,when you finally finish the cubic,your exited and happy.well that's how I felt with this film.by the time this film ended,I was exited that I saw it and happy by the time that it ended.M.Night may not be no "Wes Craven", "Stephen King" or "Stanley Kubrick" when it comes down to terror or scares of levels like them.but M.Night delivers the goods.he knows emotions,he knows how to break …

No posts have been made on this movie yet. Be the first to start talking about Unbreakable!