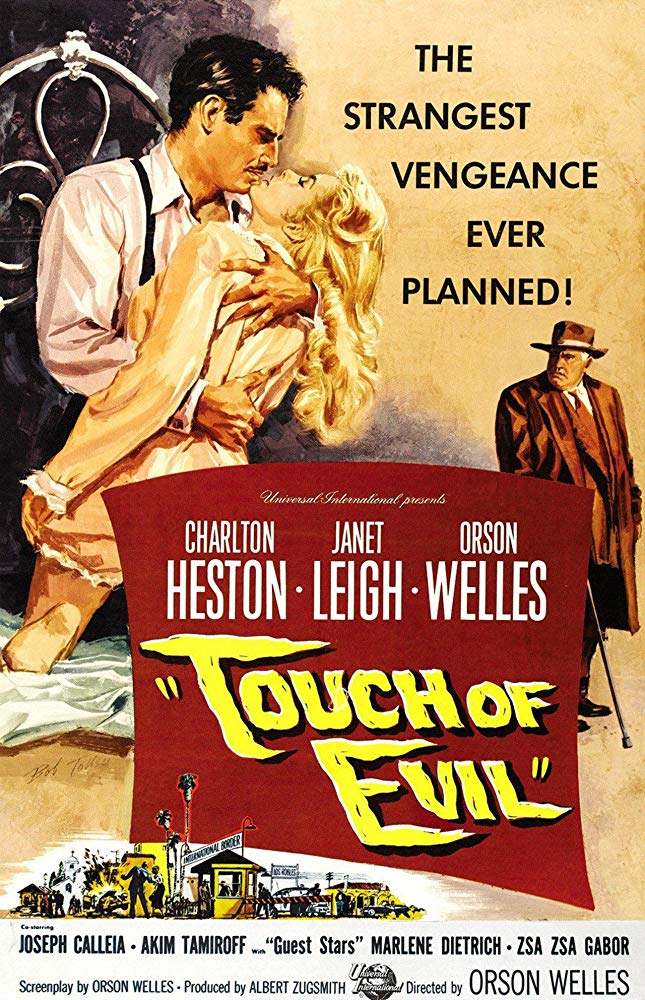 Plot: Set in a border town of Mexico, a battle between good cop and bad cop, in which corruption is the main plot point.

Orson Welles' film noir classic about police corruption taking place south-of-the-border sports as much stylistic flair as you'd expect from Welles' direction and a plot so energetically paced despite its occasional detours with a strong cast and so many celebrity appearances (from the likes of Marlene Dietrich, Zsa Zsa Gabor, and Dennis Weaver) that you'll enjoy every minute of it.

Although Citizen Kane is considered Welles' masterpiece, this film is, to me, his most involving. Welles creates a swarmy and sinister landscape, populated with noir caricatures. "Touch of Evil" is tense and suspenseful throughout and features some impressive cinematography (amazing use of shadows and an extremely long tracking shot.)

The opening sequence alone will keep you glued all throughout while admiring the technical skills of Welles. One of the pioneer thrillers/film noir may come off slow in the beginning and shows some elements that are dated, its influence and impact however is legendary. Newlyweds Miguel "Mike" Vargas (Charlton Heston) and Susie (Janet Leigh), together with Police Chief Pete Gould (Harry Shannon), District Attorney Adair (Ray Collins), police Captain Hank Quinlan (Orson Welles) and Quinlan's longtime partner, Pete Menzies (Joseph Calleia) become involved with a car explosion from a planted bomb.

One of the best soundtracks of its genre with a solid cast, and from the director's efforts. Direction, cinematography and pace were fabulous as always, makes you feel part of the movie. …

"What does it matter what you say about people?"

Considering that it had to be pieced together based upon a Welles memo after Universal chopped it up--and that it contains the seemingly laughable sight of Charlton Heston portraying a Mexican--it's astonishing that this film is even watchable. But it's much more than that. The opening is justly revered, with it's long dolly shot from a henchman's bomb planting through the nightlife of a border town to an exploding car. The performances are marvelous (including Welles, not always the most reliable of actors; Heston, whose bombast works in his favor as the righteous police officer; Leigh, as Heston's frightened but strong wife; and Marlene Dietrich as an enigmatic madam). As usual, Welles' camerawork is wonderful: great canted angles (especially the low angles of his monstrous …

No posts have been made on this movie yet. Be the first to start talking about Touch of Evil!