This Film is Not Yet Rated Movie Information 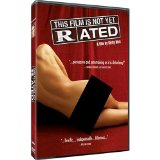 Plot: This movie takes you inside the independant film maker and the highly secret MPAA process of rating films.

You should never censor an artist work. "This Film Is Not Yet Rated" is informative, funny and it dose a great job pointing out how ridiculous the MPAA really is. I highly recommend checking this documentary out, as you really do learn a lot from this.

Dick and his crew's utilize a private investigator, Becky Altringer to unveil the identities of raters. It was fascinating to discover how the films are rated from number of penetrations, lesbian/gay sexual acts and type of swearing. Soundtrack used was nice but the method it was presented was like watching a music video though the director researched the material well. This Film is Not Yet Rated shows how the rating system can be twisted by regular rich folks who even lack the knowledge in rating a movie.

The film industry, just like many other, is filled with questionable leadership and arbitrary decisions. Case in point, the MPAA, whose rating system is obviously flawed when Hostel gets a pass but Shame doesn't. What is it about sex that bothers so many uptight Americans? Anyway, a pretty good doc. that digs into the heart of the issue.

Merciless attack on the MPAA

A groundbreaking expose about the confidential goings-on at the MPAA (Motion Picture Association of America). Director Kirby Dick's methods are both infantile and ingenious, but his statements about the monopoly of governing the film rating's system are incontrovertible and his reasoning is convincing. It would be nice to see the MPAA make a film of their own in retalliation--I for one would be quite interested to see how they would attempt to condone or defend some of their activities and guidelines now that the wool has been removed from the eyes of the public. My one quibble: why not include the deleted scene on the special features in which Kirby Dick catches the MPAA red-handed pirating a film: the thing they are most opposed to? Final Grade: A-

My DVD's: Documentary by Snoogans

No posts have been made on this movie yet. Be the first to start talking about This Film is Not Yet Rated!