There Will Be Blood Movie Information 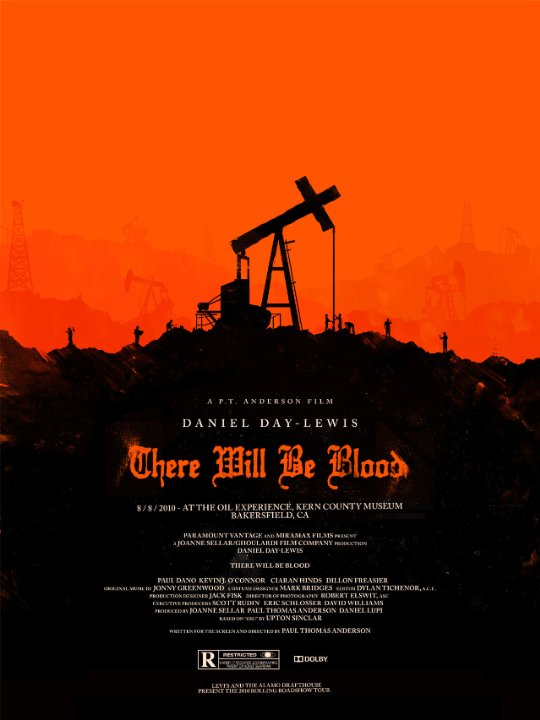 Plot: During the early oil discovery days, a Texas farmer discovers oil only to be swallowed by its greed.

One of my favorite movies, P. T. Anderson crafts an excellent script and has perfect direction in this gritty business drama.

This film was long but it felt it needed to be. Lewis is fantastic as the oil tycoon if you will and Dano is amazing as well. The film contains a depressing aura about it , but is worth watching .

During the early oil discovery days, a Texas farmer discovers oil only to be swallowed by its greed. This movie started of silent and people getting oil out of the ground and the movie is set in different years of time which works in this movie not like other films. The acting is Fantastic and out of this world unspeakably brilliant and the cinematography is breathtaking.

I drink your milkshake! Masterpiece

3 time Academy Award winner Daniel Day-Lewis pulls of another outstanding performance and picked up his second Oscar for Best Actor. The film also won the Oscar for Best Cinematography. It was nominated for eight Academy Awards altogether, including Best Picture and Best Director

Daniel Plainview is an ambitious, competitive owner of an oil drilling company in the early 1900âs. What starts off as an early discovery of oil from a drill culminates into a massive and successful oil business. Daniel has only his own interests at heart and has no regard for manipulation and using others, including his son, to get what he wants. In addition, he doesnât want anyone else to succeed.

After receiving a tip from Paul, Paul Dano, about a large amount of oil situated beneath a plot of land, …

Daniel Day-Lewis. He drinks your milkshake. Then wins an Oscar.

Paul Thomas Anderson proves yet again that he is one of the most talented filmmakers working today in this miracle of a movie, where the script, acting, music, direction, cinematography and structure all outweigh each other. I have nothing but applause and praise.
Every scene is basically even better than the last. PTA knows how to pace and piece together a drama to convey the full story.
Daniel Day-Lewis isâ¦ someone else. Compare this Daniel Day-Lewis with the one from My Left Foot or Lincoln. I swear, whenever he is on screen: MAGIC. A well-deserved and earned Oscar.
The long, close shots of people's expressions and of landscapes baffle me every time. The angles seem so elegant and never in the wrong frame.
But …

"There Will Be Blood" by Amanda

Directed by Paul Thomas Anderson and starring Daniel-Day Lewis this was my choice "Best Picture" winner at the Academy Awards and easily one of my favorite films of 2007.

Paul Thomas Anderson's style in this particular film has often been compared to Francois Truffaut, known for his unique character dramas, camera techniques, combined with an underlying message the viewer may not be ready for. It is a masterful combination that most films and flicks lack. Usually it is all flash and spectacle in Hollywood, a slow paced slow forming character drama, a political propaganda piece, etc.

Paul Thomas Anderson, in this rare instance, deserves to be compared to one of the founders of French New Wave because of his spectacular character study that celebrates classic cinema technique with …

No posts have been made on this movie yet. Be the first to start talking about There Will Be Blood!