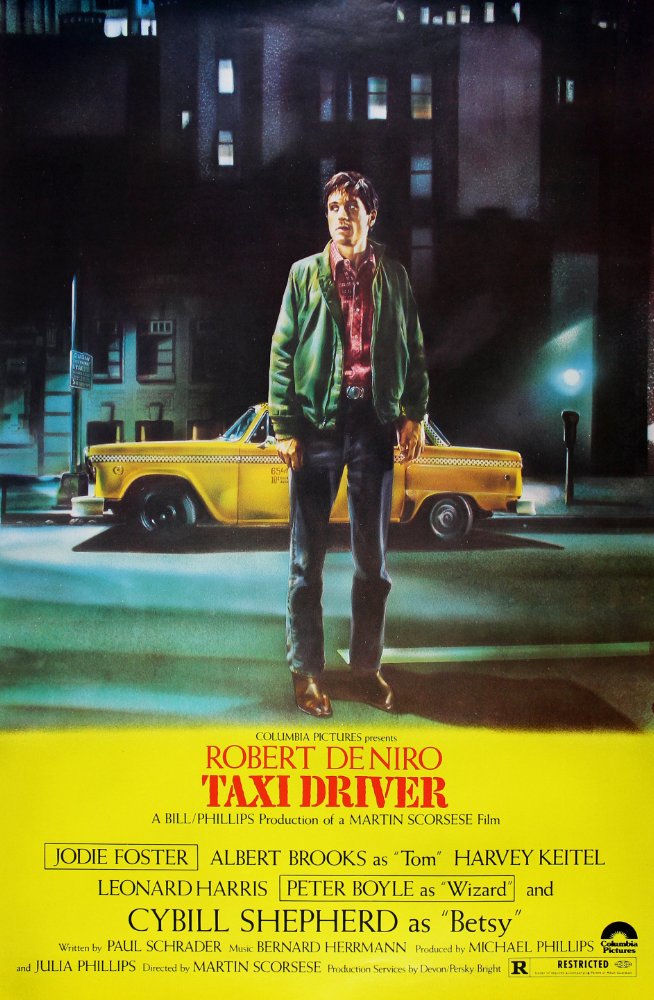 Plot: A Vietnam vet is a taxi driver who obsesses over a woman, while at the same time he tries to save a young prostitute. His mental instability makes him go to the extreme in certain situations.

Scorsese's darkest, "Taxi Driver" packs all of the iconic director's familiar themes into one unforgettable film.

Goddamn aggressive... The director's second best masterpiece came out in 1976, an era in which even American cinema started to explore willingly the atrocious human nature. Taxi Driver is a bold and daring picture for several reasons; classic one-liners and a stylishly brutal climax are just the beginning. A psychotic and wonderfully shocking journey into a disturbed mind. 97/100

"Are you taking to me?" The film is about a taxi driver who obsesses over a woman, while at the same time he tries to save a young prostitute. His mental instability makes him go to the extreme in certain situations. This movie was brilliant, I mean the directing was brilliant and Robert de Niro was brilliant has the taxi driver.

Characteristics of a masterpiece.

An observation. A continuation. An infatuation. An obsession. A culmination.
Taxi Driver may be the best character study ever made.

Travis Bickle has gone down in film history as the insomniac taxi driver/amoral philanthropist. For good reason.
Robert De Niro is one of my favorite actors, and I consider this his crowning achievement. The visceral tone and sense of calm he brings to this character who starts out so minute and bursts into insanity is incredible.
His character owes a lot to the brilliant script by Paul Schrader. Man, that guy knows how to effectively construct characters who know how to interact with each other. Some of these scenes are golden, especially the ones without dialogue, or just a shot of Travis' eyes ever-observing the city's grimy nightlife.

The odyssey of insanity

This is one of most brilliant scripts ever. It should be called The odyssey of insanity.
Why is he insane? City filled with "scum" is one big reason, enviroment in which 12 year old girl is prostitue is not enviroment where someone wants to live. Another reason is that main character is not very good in relationship with people, or is it better to say that he is completely alone and as such he doesnt see people in very positive light. One person he saw in positive light is that girl he took to porn film not knowing how is she going to react on that. That for sure scared her, and he felt even bigger hostility toward his enviroment. he had to do something. And at this point everyone can feel what he feels and that is something we have to thank for to writer and director. First he tries to …

Robert De Niro as Travis Bickle, is a former Marine and a taxi driver who enjoys pornography and women. He meets Betsy (Cybill Shepard), campaign volunteer for New York Senator Charles Palantine. Bickle encounters a 12 year old prostitute named Iris (Jodie Foster). He finds a way to let Iris escape from Sport (Harvey Keitel). An enthralling screenplay, endearing score and excellent cinematography that showed the hellish streets, the picture exemplifies societies vile. Flow of the film was flawlessly accomplished. Foster and De Niro were brilliant in their roles; you see the charm in Iris and the recluse nature of Travis. Some memorable quotes: Travis Bickle â âSomeday a real rain will come and wash all this scum off the streets.â âAll my life needed was a sense of …

No posts have been made on this movie yet. Be the first to start talking about Taxi Driver!