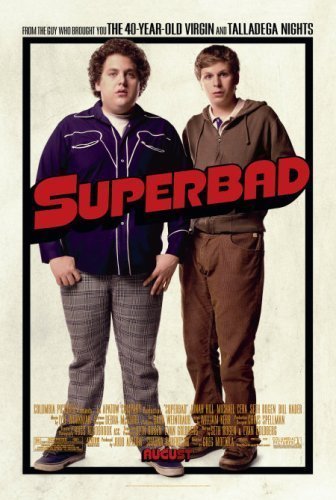 Plot: Two co-depended teens split up to get alcohol so they can get laid before they go to college. As the night goes on the two find themselves having separation anxiety and getting laid takes a backseat to finding each other.

One of the funniest teen comedies I've seen. "Superbad" is as smartly observant as it is raunchy and its leading trio go down as there of the best movie friends ever.

While this is not as funny to me as 21 Jump Street or This is the End, two other Jonah Hill movies, it's not far behind. Extremely funny, not Emma Stone's best but she is good here as usual. A thoroughly enjoyable movie.

I hate contemporary American comedy. Fact. So this combination of High School coming of age, gross out comedy and night in hell formulae is the kind of movie I'd usually crawl naked through broken glass to avoid. But it's actually really, really funny! There are loads of hilarious lines, particularly involving Jonah Hill's brilliant tirades against his fellow nerds ("Nobody's had a hand job in cargo shorts since 'Nam!"). I loved the cops as well (look out for the extended "semen" speech on the DVD extras!) and not only is it genuinely witty rather than relying on cheap, dumb "laughs" as most of these films do, it actually has some insightful and heart warming moments towards the end, even more so than the empty celluloid of the likes of Garden State. I don't really think it's got much in …

Superfunny. Michael Cera made this film for me. I can relate to his character the most because even though he's awkward and kind of dorky, he has the heart and charm that you can't help but admire. Jonah Hill is great as well, playing the sarcastic and sometimes self-centered best friend. Although most people argue that the reason why this movie dominated the box office is because it's funny and raunchy at the same time, I'd place my bet on the fact that everyone can relate to these characters because there's a dork in each and every single one of us. Everyone goes through adolescence and wanting to belong; this picture is all about those. I won't be surprised if this turns out to be a classic because I did enjoy this film from its opening credits. Even though this is not the best movie …

Let me start by saying that I liked 40 Year-Old Virgin. Not a cinematic masterpiece, but really funny and sweet at times.

Knocked Up was okay, not great.

This movie kinda falls below even those other two.

The first 20 minutes or so were pretty funny, with Jonah Hill's rants about getting laid and alcohol mildly entertaining, while Michael Cera did his standard "George Michael" Arrested Development innocent thing.

Then it just got boring and long. Get to the freaking party already. The jokes started getting more and more lame, but I will say that the last 10 minutes did kind of pick back up.

No posts have been made on this movie yet. Be the first to start talking about Superbad!