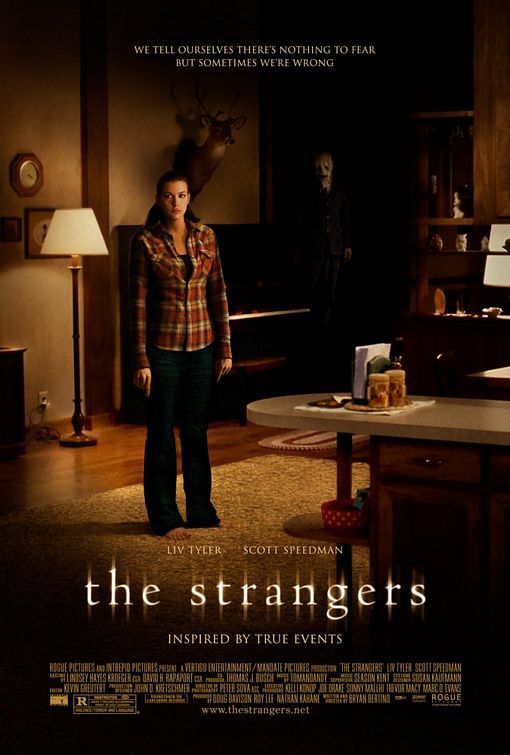 Plot: A young couple takes a vacation to a remote location where they are terrorized by strangers.

The thing that puts this film above most other horror is its constant suffocating feel. The plot was basically nonsense (the par for most horror) however the dialogue was pretty good. Example, one of the victims is tied up as a masked killer advances with a knife and she screams, "Why, why are you doing this??" The killer only responds with, "Because you were home..."

The movie is about a young couple takes a vacation to a remote location where they are terrorized by strangers. Remember how John Carpenter's Halloween was so scary and so chilling to watch, That movie had good characters and it was so creepy, but the Strangers was really slow and really boring and not scary at all.

This movie is creepy to say the least. Young beautiful Liv and her bo go on a romantic getaway where a family of psycho killers stalk them and terrorize them. The movie makes you suspicious of your own surroundings as the director filled the movie with effects that make it seem even more frighting. Definitely one to watch with your mate in your arms..

"The Strangers" by Yojimbo

A young couple return home from a party in the early hours to be terrorized by masked strangers. And that's it. This film reminded me of Open Water, in that it's "based on true events" about a couple in a scary situation, but the fact is that no-one really knows what happened. And according to the script writers of both films, the answer is: nothing much. The Strangers is a purely by the numbers slasher flick that uses all the usual devices of shadowy figures appearing and disappearing in the background, faces appearing at windows, menacing bumps in the night etc etc etc. The characters do all the usual cowering in wardrobes and falling flat on their faces as soon as they try to run anywhere and do nothing but whimper in corners and shout "Why are you doing this to us?!!" like good …

The quality of the horror genre this decade has been mediocre at best. Their have been some dreadful films like When A Stranger Calls and some really terrific horrors like The Descent. With other films like Saw and Hostel representing the mediocrity horror for this decade, my expectations for The Strangers were relatively low. For the first twenty minutes or so, I was on the edge of my seat as director Bryan Bertino built a suspense driven atmosphere with unbearable tension. As for the latter half, The Strangers disappointingly spirals downward into mediocre territory, ultimately becoming a traditional mad slasher film.

Liv Tyler and Scott Speedman star as a couple who's relationship has just hit rock bottom when taking a trip to an isolated vacation home. The two are distant and …

I had high expectations coming into this film because its trailer was really good. I was really disappointed with movie because there werenât enough thrills. With its running time of barely an hour and thiry minutes, it spent too much of its time trying to get its audiences to care for its characters. But when the âscaresâ actually finally happened, it was more laughable than anything because the characters made one stupid decision after another like most horror films out there. Liv Tyler is pretty good because she conveyed a lot of different emotions but her character was helpless most of the time. I wouldâve liked to see her a bit tougher and less terrorized. For a short full feature film, I feel like they ran around the house for five hours, not really accomplishing anything …

No posts have been made on this movie yet. Be the first to start talking about The Strangers!