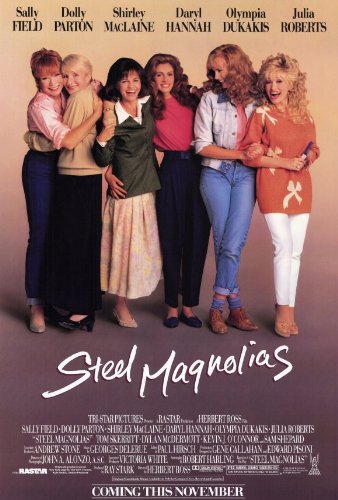 Plot: Southern woman share laughs, love, and the trials and tribulation of life. -- The Scripted

Deeply emotional, it's an overlooked comedy-drama about living life and finding meaning in death.

For a chick movie, it's actually not that bad. There are some strong female actors here.

A moving look at the relationship between a group of southern women over a period of several years. Touching, funny, charming.

There's a reason I haven't given this top marks, even though, for the most part, I think it deserves it. The reason is that I feel myself being manipulated when I watch it. I know that sounds a little weird, considering that it is the objective of most films to manipulate its audience, but I don't like to feel so obviously directed in my movie-watching experience. Having said that, in essence, this film is a rather good one. It's basically comic, not because of the situations it depicts, but because of the things the characters say. That means that it is a collection of mostly funny one-liners, which are building up to a tearjerking tragedy. This makes me think that the aim of the film is to have you laughing one minute and blubbing the next, which I can't help feeling, is a pretty …

No posts have been made on this movie yet. Be the first to start talking about Steel Magnolias!