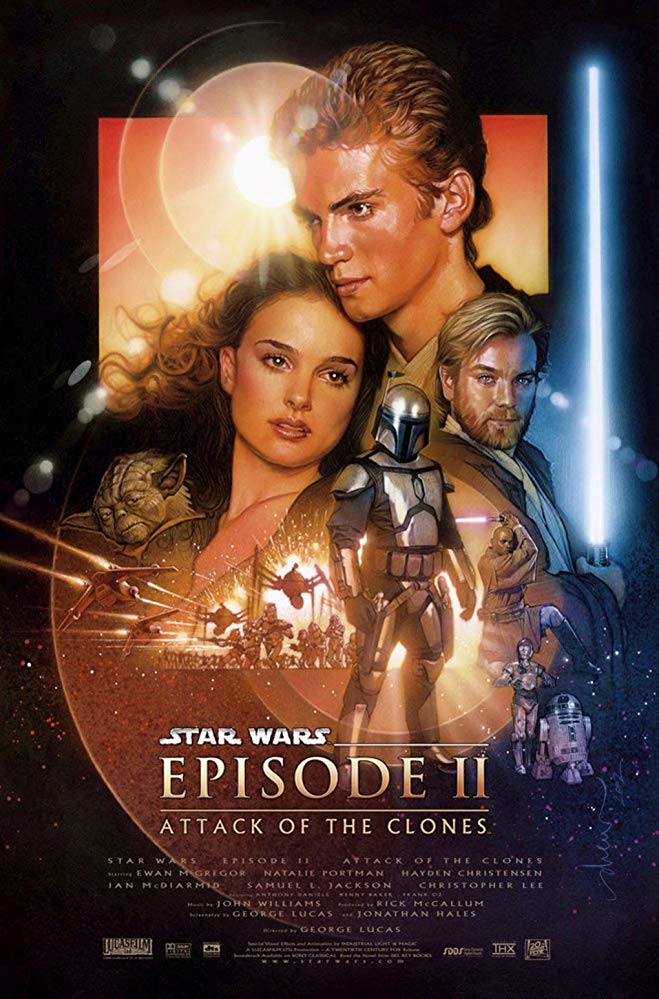 Plot: Ten years after the Phantom Mennis, Padm? Amidala is now a Senator representing her home world. A small group of separatist plot to kill her so Anakin and Obi-Wan Kenobi go to investigate.

This is the film that proved Star Wars fans that Phantom Menace wasn't a mistake. Ten years after the Phantom Mennis, Padm? Amidala is now a Senator representing her home world. A small group of separatist plot to kill her so Anakin and Obi-Wan Kenobi go to investigate. This movie had better visual effect's and the epic battle scenes at the end is good, but Hayden Christensen acting was dreadful and he was so annoying through out the movie. The movie is called Attack of the Clones and the Clones only attacked once and that's towards the end of the movie. The writing was some of the worse writing I've ever seen and the whole movie was dull mess.

Though, we get more lightsaber fighting and a big battle sequence, the rest is muddled in a tedious love story and a very un-mysterious mystery. I consider it the worst of the series.

In my opinion, this was the worst of the prequels. It was too political, Hayden Christensen's acting was over the top and the cheesy scenes with Padme was just grotesque. More action yes, but I felt it tried too much to impress. You get too see Yoda in action during his "youthful" Jedi Master days, which is the best moments of the film. I felt this was used as a filler to just connect the future Darth Vader. Probably one of the worst screenplays in the SW franchise. Star Wars II: Attack of the Clones felt rushed, repeated, and just plain long without a substantial plot that connects to the previous film. At least they made it up with the 3rd instalment.

"Attack Of The Clones" by Yojimbo

And so the irritating child has become a pouty teenager who is quite possibly carved from the finest mahogany. After grudgingly revisiting this, my least favourite of the prequels (and that's up against some STIFF competition) I have to say that my initial anger has subsided somewhat and given way to a kind of post-modern amusement. George cannot write or direct, that much is clear. The plot to padding ratio of the script is amongst the most shocking I've ever seen and some of the dialogue is surely the worst ever spewed forth on the silver screen (what woman could possibly resist the old "you're not like sand" routine...) The attempts at humour are also embarrassing to say the least; I've seen better jokes on ice lolly sticks. The sequence in the droid factory looks like it was included …

Again, full-fledged Star Wars fanboy here, with my take on Episode II, Attack of the Clones.

I don't think this is a step up from The Phantom Menace (which had its share of problems and many detractors). This isn't aimed at the kids anymore, but it still has its problems. First off, and the most vocal criticism, is the casting of Hayden Christensen (taking a line from Clerks II - "Mannequin Skywalker). This was not a good choice. He has no chemistry with Natalie Portman (important for a forbidden love story) and he doesn't work much better with McGregor. There is a master/apprentice thing going, but I though Obi-Wan and Qui-Gon was a much better pairing.

Luckily, if you can get past this casting mistake (and the wooden love story) the rest of Clones is actually a good story. You …

A good follow-up to Episode 1

One of the most high-profile targets of the opposition is "Senator Padme Amidala" (Natalie Portman) of "Naboo," who escapes an assassination attack thanks to her look-alike decoy, who gave her life to save that of the former queen. "Jedi Master Obi-Wan Kenobi" (Ewan McGregor) and his apprentice "Anakin Skywalker" (now being played by Hayden Christiensen) are dispatched by the "Jedi Council" to protect the young politician. Upon their first meeting in the senator's home, she almost doesn't recognizes the former slave she first met on the desert planet of "Tatooine" ten years ago.

No posts have been made on this movie yet. Be the first to start talking about Star Wars: Episode II - Attack of the Clones!