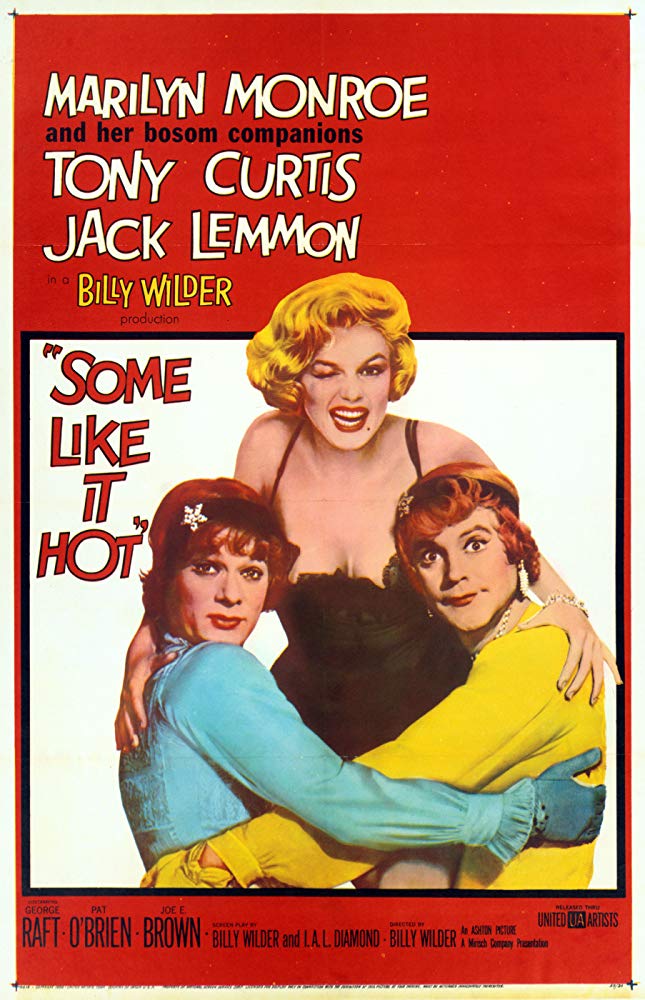 Plot: When two men run from a murder, they disguise themselves as women, only to find themselves in more trouble when the both fall for the same girl, who only knows them as women.

A true classic. Its strong performances and peppy, well-crafted script make "Some Like It Hot" Billy Wilder's most iconic movie.

Billy Wilder goes wild... and hilarious. Some Like it Hot is an exclusively original, stylish and brilliant comedy. Jack Lemmon and Tony Curtis were exceptionally perfect for such roles. And hear at their female voices! Fine comedy and a must-see classic. No list of favorite films is complete without a sexual satire, especially if it has the charm and appeal of a sexy Monroe just before the decade of the 50s had ended! 97/100

Despite being on so many "funniest films of all time" lists, I didn't find this film laugh out loud funny. It's more of an enjoyable romp that derives its humor from the energy and camraderie of Curtis & Lemmon. Great final line, though.

A pair of musicians witness a mob execution and so go into hiding disguised as women in an all girl band in Florida. Billy Wilder made his name making a variety of black hearted satires, but here we find him at his least cynical. It's one of those types of film they just don't make any more as the brilliant double act of womanising cad Curtis and sidekick Lemmon see how the other half live. Their bickering and banter obviously owes a lot to Hope and Crosby and the gender swap is done with real subtlety and sophistication making for a host of hilarious one-liners that come so thick and fast it's easy to miss some of them first time around. Marilyn Monroe was never more appealingly vulnerable, Lemmon shows his mastery of comic timing and Curtis spends much of the film doing a hilarious …

Some Love It Hot!

Cross-dressing. A story point used in many comedies through previous decades, but in the case of this movie it was a first (correct me if I'm wrong). This premise was much more fresh, and much more funny, at the time. 'Some Like it Hot' has held up over the years as a hilarious outing. It has the perfect mix of physical humor, wacky shenanigans, one-liners, and innuendos. The mixing of sexes through appearance isn't played for cheap or vulgar laughs. The risque elements are handled maturely and don't go past PG level, yet they are still adult in content. BIlly Wilder writes characters and situations that smartly send up each genders perception of the other through silly mishaps. Fun, upbeat, and full of a variety of laughs. An enjoyment worth repeat viewings.

Joe and Jerry (Tony Curtis and Jack Lemmon) accidentally witnessed the 1929 Saint Valentine's Day massacre, was spotted by "Spats" Columbo (George Raft). Both men dress as ladies and joined an all-female band. Joe falls for "Sugar Kane" (Marilyn Monroe) while an old millionaire named Osgood Fielding III (Joe E. Brown) enjoys the company of Daphne (who is Jerry). Wonderful set locations, costumes, screenplay and cinematography. The multi-character portrayals of Tony Curtis and Jack Lemmon were effective and believable. Themes of friendship, trust, deceit and integrity were well displayed. In the words of Osgood Fielding III - "Well, nobody's perfect." In my opinion, Some Like it Hot is a rare comedy that is picture perfect from the plot, wardrobe, to directing and the acting.

No posts have been made on this movie yet. Be the first to start talking about Some Like It Hot!