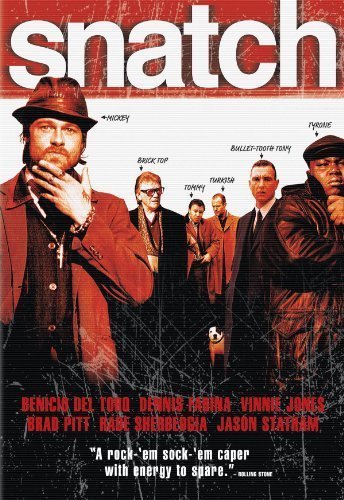 Plot: A slew of thieves posing as other professions try to track down a huge, priceless stolen diamond while putting to naive men in the middle.

You could call it a messier version of "Reservoir Dogs," but one that delivers its own style and sense of humor.

Guy Ritchie's ensemble crime drama sports a wide bunch of oddball characters, snappy dialogue, and gallows humor. But it doesn't really add up to much.

A great movie by Guy Ritchie.

Cockney boxing promoter Jason Statham finds himself indebted to a ruthless gangster and has to provide bare knuckle boxer Brad Pitt in recompense. Ritchie's difficult second movie lives up to the potential of Lock, Stock, and Two Smoking Barrels but it's hardly a massive departure. It provides the same mix of laughs and cocknernee gangster hi-jinx, but it doesn't rely so heavily on cheap laughs and Pitt is fantastic as the pikey who's as indestructible as he is incomprehensible. Statham also does what he does best and pretty much the entire supporting cast are in their element; hell, even Vinnie Jones is good in this! It may not have the glitz and glamour of the Ocean's franchise and subtle it most certainly is not, but it's also one of the most entertaining films I've ever seen as the …

I kind of enjoyed this movie even though it makes absolutely no sense story-wise. I was interested in the wise-cracking dialogue, listening to the actors' accents, and witticisms. For me, the performance that jumped right off the screen was Jason Statham's. His eyes have this focused intensity that made me want to follow him from beginning to end. He has this cool aura that makes one get to know him better. Since his performance is so strong compared to the other actors, whenever Statham is not on screen, I lose interest. If this film had less characters and less unworthy storylines that go nowhere, it would have been much better because I would be less bored. Still, this is not a bad movie. It's simply alright. Most guys love it, most girls hate it. I happen to lie somewhere inbetween.

No posts have been made on this movie yet. Be the first to start talking about Snatch!