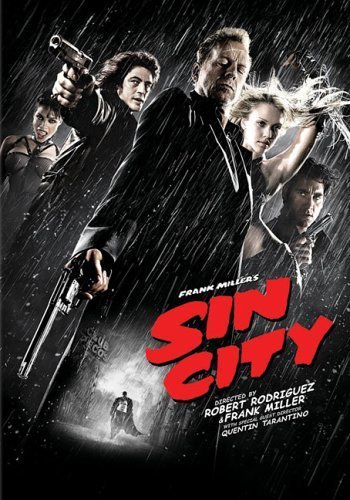 Plot: Four stories that interweave between each other told through the voices of characters involved. It is a tale of crime, corruption and what its like to live in the darkest city, where good things seldom happen.

I pretty much want to live in this world... lol super sophisticated review, I know!

This is my all-time favorite movie. A gripping and stylish film which presents a surreal world in a noir setting. The originality, emotion and masterful storytelling set it apart from the rest of the crowd. Very few films even approach this masterpiece.

Three stories from the corrupt underbelly of Basin City intertwine involving an aging cop trying to protect a young girl from a child rapist and killer, an psychotic ex-con revenging himself upon those who framed him for the death of a hooker and a killer in the middle of a turf war between the mob and a heavily armed red light district after the girls accidentally kill a corrupt cop. Containing all the trademark Noir elements of Frank Miller, Sin City is cinema aping comic books aping cinema. And it works brilliantly. Rodriguez was the perfect man for the job, and his brilliantly dynamic and stylized visuals combined with a frame-by-frame recreation of the original graphic novel does something no other comic book movie has done before; literally brought the source material to life. …

Film noir is a very exciting element to tackle in any film, as it can easily make or break the atmosphere that's being tried to achieve. And in Sin City, an adpatation of Frank Miller's acclaimed graphic novel series, Rodriguez succeeds with flying colours.

To be precise, it's more of an adaptation of film to fit into the dark, shady world created by Miller, seeing as that's the best possible way of bringing the source material to life. And Rodriquez acchieved this to the best possible level by hiring Miller to co-direct. ( Miller in actual fact said the only way Sin City would get made is if he was directing it )

Full points to Rodriguez for assembling such an ensemble to bring Sin City to life as well. The film is categorized into three different yet interjoining stories. It …

I have always wanted to see what the fuss was about with Sin City. Letâs start with the source: Frank Miller. He is one of the most very popular, successful and talented graphic novel writers ever. This was one of the reasons the Director, wanted to adapt the Sin City to the big screen. Next would be the remarkable cast who signed up: Bruce Willis, Mickey Rourke, Carla Cugino, Elijah Wood, Benecio Del Toro, Britanny Murphy, Rosario Dawson and Jessica Alba just to name a few. The action and story is next: think Die Hard, Shooter, Kill Bill mixed in a pot with some Leon on the side. There was a guest director by the name of Quentin Tarantino, who Iâm sure gave some beefy suggestions to improve the filming. So many characters to enjoy and cringe from, itâs really fortunate …

No posts have been made on this movie yet. Be the first to start talking about Sin City!