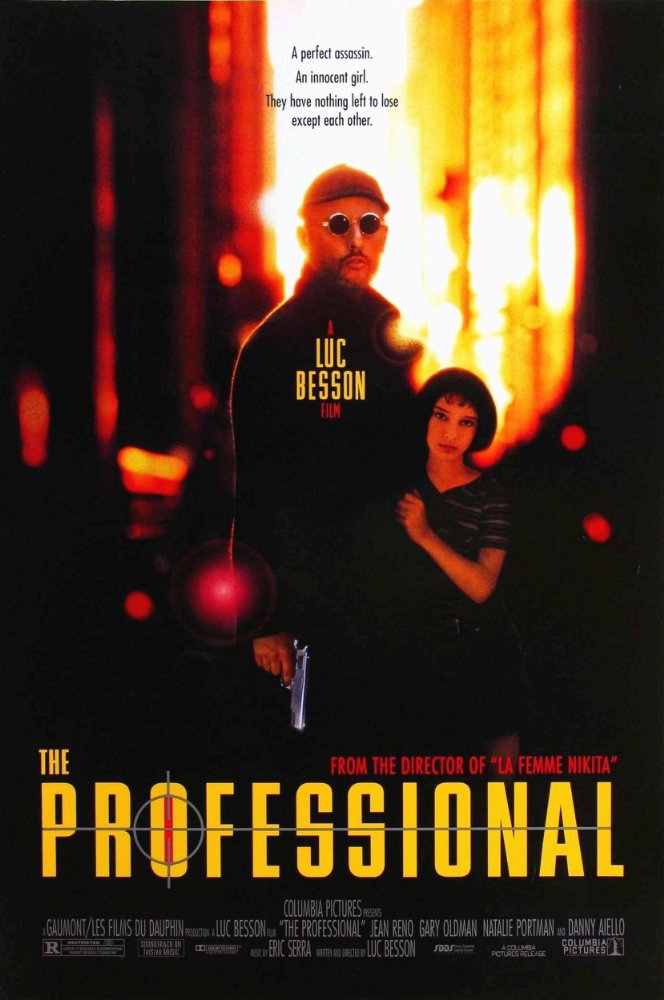 Plot: A trained assassin is reluctant to take care of his Neighbor, whose parents are killed. The girl is 12 years old and he teaches her his assassination trade.

Young Natalie Portman is terrific in this story of a hitman taking an orphan under his wing.

The story is about a trained assassin is reluctant to take care of his Neighbor, whose parents are killed. The girl is 12 years old and he teaches her his assassination trade. This movie stared of pretty damn cool if i must say, but when the assassin teams up with that 12 year old girl the movie be came light and soft and became a family movie until the shot out scenes. Gary Oldman plays a over the top villain but his such a good actor he pulled it over really well.

The Professional succeeds because of the charming, pretentious, and believable relationship between its two leads. The somewhat cliche corrupt cop storyline sometimes doesn't work, but the Portman-Reno plot holds everything together. A special mention should be made of the film's explosive and exciting conclusion.

"You can't stop what you can't see"

Luc Besson's slick uber-nineties styled action thriller has a great lead performance by the ever underrated Jean Reno as Leon, a stoic cleaner for the mob that takes a young neighbor named Mathilda (Natalie Portman) under his protection after her family is murdered by a vicious dirty cop named Norman Stansfield(Gary Oldman).
Oldman's infamously over the top turn as villain Norman Stansfield is the stuff of internet memes. Eminently quotable yet ever frightening as a character, Stansfield's evil presence is felt even when off-camera. One of the 1990s' best movie villains.
Natalie Portman is very good as the snarky if vulnerable Mathilda who swiftly becomes accustomed to Leon's solitary and dangerous occupation. And their relationship is where the movie becomes awkward to watch …

Professional killer Jean Reno reluctantly takes in a 12 year old girl after her family is murdered by corrupt police detectives. Luc Besson's mix of offbeat characters, humour and high octane action tends to be a little hit and miss, but in Leon he found the perfect balance between sensitive character study, emotion and tense action sequences. Pot plant loving, milk drinking loner Reno is the antithesis of the usual testosterone-soaked, gung-ho action hero and with no glib one liners or macho posturing, he takes no pleasure in the mayhem he induces; he's just very, very good at it. His relationship with a young Natalie Portman is sincere, funny and touching, and although emotionally ambiguous (at least from her adolescent point of view), it never crosses the line into sexual creepiness. …

No posts have been made on this movie yet. Be the first to start talking about Professional, The ( LÃ©on )!