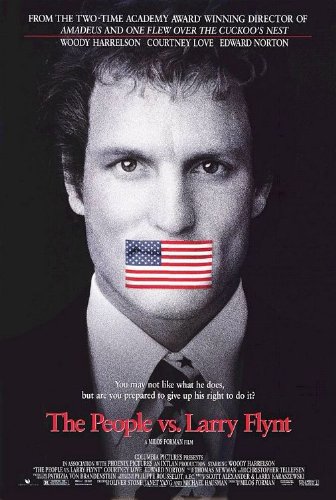 Plot: A comical biography of Larry Flynt's life, the birth of Husler Magazine and his battle for free speech in America.

Not sure how this one didn't recoup it's productions investment at the box office (at least according to Wikipedia). The casting and constant feel of the era being portrayed were awesome, with nary an anachronism. Despite how you may feel about Courtney Love she gave a knockout performance in this one, as did Woody Harrelson who was very convincing as both a pre and post cripple smut peddler. I would definitely make the time to watch this one, not only for the movie, but also for some historical perspective on a man who had a large influence on the development of the porn industry, and still does today.

Woody & Courtney Love were great.1 of my favorite movies

A melancholy portrayal of the life of Larry Flynt. I liked how director Forman neither condemns nor condones Flynt's behavior and Woody Harrelson puts in a commanding performance. At times, the film drags and meanders, but the key scenes of Flynt's life are captivating because of the bold cast performances.

A bit weak,, but okay

"The People vs. Larry Flynt" is the story of adult magazine publisher, the controversial Larry Flynt and his fight to publish what he wants under the rights of the US Constitution.

The movie moves very slowly, and does not catch the viewer. However, the performances are pretty good.

It takes it's time to go through the early life of Flynt, and plods through key parts of his story. This has to be one of the slowest movies I have ever sat through.

Character development is pretty weak, but because of the fact that many of the people depicted are public figures, you are suppose to know these people. There are, however, many people you don't know anything about, and the movie doesn't explain how these people came together.

It is the performances that carries this film. Woody …

Top Ten Films of 1996 by KingoftheCorn

No posts have been made on this movie yet. Be the first to start talking about The People vs. Larry Flynt!