P.S., I Love You Movie Information 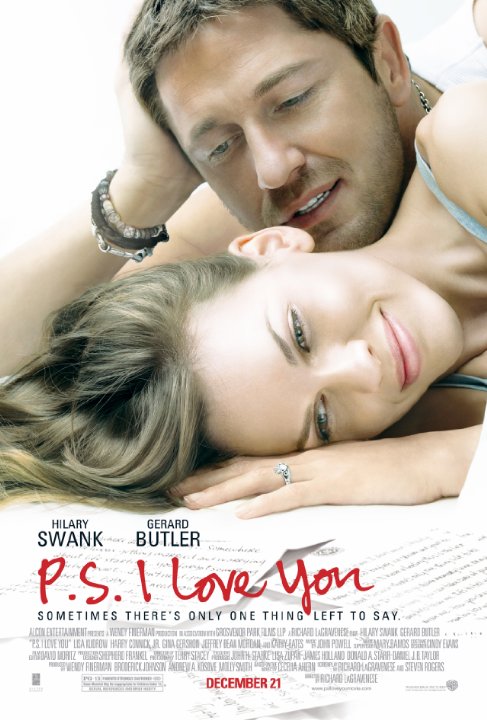 Plot: After loving the man of her dreams a woman becomes a young widow to be surprised that her dead husband has left her fun things to do to help cope with his death.

A man and a women may fight and get angry over nothing,but deep inside they are showing they true feels to the world and they still love enough.

What I like about this movie is that it didn't force to have a "happy ending", but something legit and understandable resolution.

Decent concept here actually. The one hold up in this movie that I could not get past was I couldn't see a single reason why he was with her in the first place. While I really did enjoy the flash backs to when they met and while they were dating I didn't see a single thing that would make her the slightest bit interesting or worthy a trans continental love affair. One scene in particular when they first met Hillary Swank was so contrived and put together I just had to roll my eyes at it and it sucked me out of the reality and any emotion in the movie what so ever. Hillary Swank can do dark drama, it seems anything light hearted is far beyond her grasp. She completely lost this roll. In a movie that should have been full of emotion it fell terribly short. I blame the lack of connection …

For Both Cynics and Romantics

I liked the film for many reasons but there is no reason for it to be more than two hours long. Its running time actually dragged the story down and I grew increasingly restless. I thought Hilary Swank did a good job as a grieving widow. Even though I'm used to watching her play tough women (and though she looks tough in this picture as well), she has many soft moments. Or maybe I just have a soft spot for Swank because I enjoy every movie she's in. Gerard Butler did a good job as well even though every time I see him, I imagine him yelling, "This... is... Sparta!" and then I couldn't help but laugh to myself. But my favourite is Kathy Bates' character because she's the most connected with reality. Even though she may sound kind of tough at times, I agreed with everything she said, …

No posts have been made on this movie yet. Be the first to start talking about P.S., I Love You!