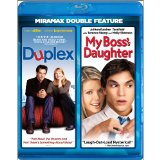 Plot: When his boss asks him to look after his house while on vacation, Tom Stansfield takes the opportunity, hoping it will lead to the perfect meeting with Lisa Taylor, the boss' daughter. Yet a series of bizarre houseguests, and a brother on the run from drug dealers, threatens to derail his plan. -- Chris Kavan

I can't remember if it was bad or terrible, but usually I like Tara Reid. She DOES have talent, believe it or not. Heck, Robert Altman used her in a film.

This movie had some star power and I thought it would a fun movie. It was not the worst movie I've ever seen but it is not the best either. It had a bad plot and a weird ending.

For years I hesitated watching this movie. Now, I know why. It was even worse than I'd expected. I thought it would be OK but it just got worse and worse. Ashton Kutcher makes the worst movie mistake of his career, since 'Dude, Where's My Car?' Tara Reid co-stars as the girl of Ashton's dreams, who asks him to babysit her father's house (and his boss)'s pet owl for the weekend. The rules: 1. No shoes in the house. 2. No people in the house. 3. The boss' son stays out of the house. 4. Don't touch the furniture.

Well, you can pretty much guess by the end of the first twenty minutes, how the rest of the film is going to turn out.

You know right from the start that bad things are going to happen, and they're mostly stupid things ( that are extremely UNFUNNY) that would never actually …

All movies I've seen by Final_Fantasy

No posts have been made on this movie yet. Be the first to start talking about My Boss's Daughter!