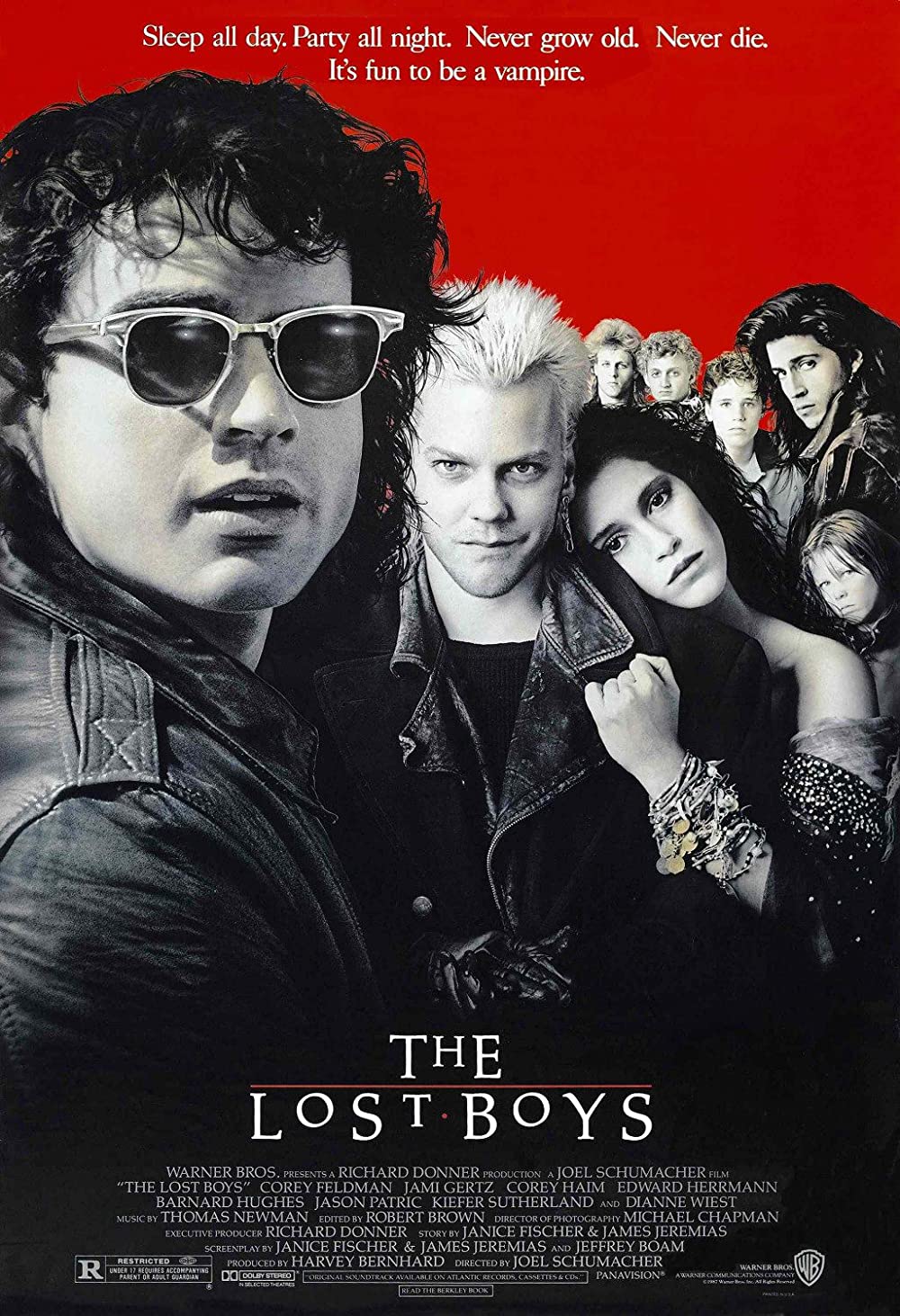 Plot: A family, that is staying with their grandfather, finds that there is something strange going on in the town. The town is plagued by odd deaths and missing people, vampires could be the culprit.

Schumacher's typical flair cannot distract from sloppy storytelling and tonal shifts. The up and coming cast of 80s teen actors aren't bad. The ending just throws everything and hops that it sticks. Or perhaps that audiences will forget what they even saw before it matters.

The story is about a family, that is staying with their grandfather, finds that there is something strange going on in the town. The town is plagued by odd deaths and missing people, vampires could be the culprit. This movie is a fun 80'S movie with funny characters and enjoyable movie.

I just never get sick of this film. I've seen it more times than I can count and I still absolutely love it. And that it's cheesy (as I see that most of you who have reviewed it have pointed out) is a big part of what makes it hilarious in my opinion. Cheesiness done right if that makes any sense. This is a film I watch whenever I don't want to think and just be happy.

The Lost Boys is a movie that many have watched and few can forget, a movie which posesses that magic which holds us and keeps us watching untill the credits roll. I have seen many vampire movies in my lifetime, and few, with maybe the exception of Fright Night, have truely ever had the feeling of immense adolescent fun that the Lost Boys had. This movie is probabely one of the most unforgettable movies of the 1980's, which really was a fun decade for movies.

The Lost Boys has some of the best performances given by teenagers I have ever seen, and the one which stands out the most is Corey Feldman's performance as vampire hunter Edgar Frog. Corey Feldman really tried to make Edger a fun character, one which you really get excited with every scene he's in, and Feldman does a …

Not the best vampire movie

A recently divorced mother (Diane Weist) and her two sons (Jason Patric and Corey Haim) move to "Santa Clara, California" (Santa Cruz, California, which is where the movie was filmed) to live with her father (Barnard Hughes). Unknown to them, "Santa Clara" is having a rash of missing children.

Shortly after they settle in, the elder son, "Michael" (Patric), attends an outdoor concert and sees a beautiful girl (Jami Gertz) elsewhere in the audience and they momentarily lock eyes and show signs of attraction to each other. Later on, they bump into each other on the unnamed local boardwalk amusement park (Santa Cruz Beach Boardwalk in reality) where she introduces herself as "Star". He then runs into her boyfriend, "David" (Kiefer Sutherland), who leads a trouble-making motorcycle gang …

No posts have been made on this movie yet. Be the first to start talking about The Lost Boys!