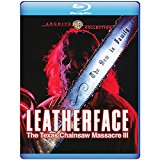 Plot: On the way from California to Florida, a couple are threatened at a Texas gas station. Thinking they are taking a worn-down road to safety, they instead meet up with a cannibalistic family. Only their wits and survivalist packing heavy weaponry will save them. -- Chris Kavan

I disliked a lot of this film. However, the one thing that bothered me the most was Leatherface himself. The look and feel of him was just all wrong to me. The only redeeming quality is Viggo's acting.

Another failed attempt at capturing the feel of the first film, the best reason to watch this third chapter is for a chance to see a young Viggo Mortensen act all crazy. The horror/comedy mix doesn't work as well this time around.

No posts have been made on this movie yet. Be the first to start talking about Leatherface: Texas Chainsaw Massacre III!