A League of Their Own Movie Information 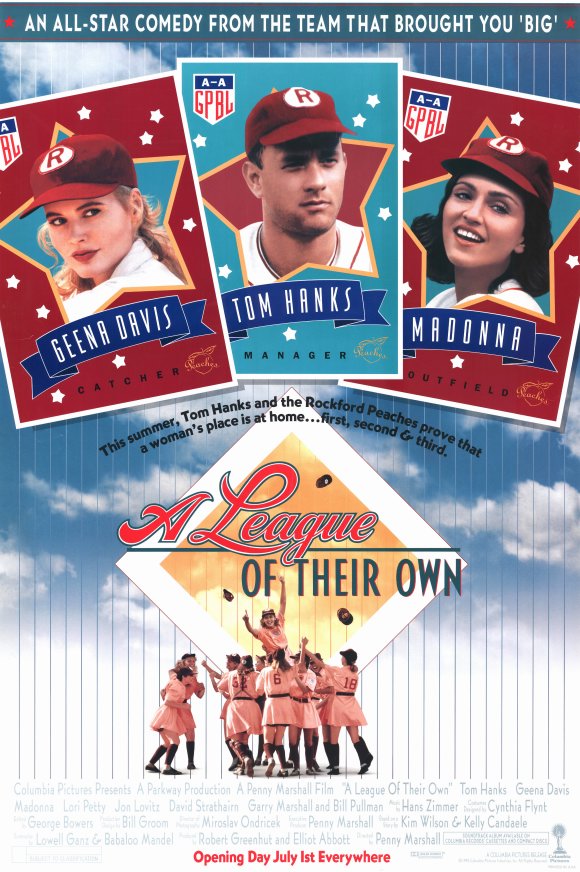 Plot: As WWII continues and men are recruited the sport of baseball continues under the All-American Girls Professional Baseball League. The Rockford Peaches are one of the teams formed, with women from all around the country taking part. -- Chris Kavan

I've seen this movie thousands of times and I still love it! it has both funny and sad moments. One of mmy favorite scenes is the dancing one in the bar! just amazing.

Despite a talented cast and some funny moments, this movie leans too much on sports cliches and doesn't quite rise above the average sports film. It has its moments of greatness, but, the third act is far too predictable and rings a little hollow.

A very entertaining and often funny baseball story. One of the better sports movies I've seen.

A Peach of a Movie which Delivers a Full Count

As the boys went off to to fight in the second World War, "Harvey Candy Bar" owner "Walter Harvey" (Garry Marshall) decides to create an all-women baseball league.

Two players recruited are two farm girls, sisters from Iowa who are in the middle of a sibling rivalry. You have "Dottie Hinson" (Geena Davis), who the movie centers around as the movie is shown as a flashback of her memories of the days playing in the league, and her younger sister, "Kit Keller" (Lori Petty), who is unmarried and is overshadowed by her sister in the local softball league.

The two are signed to the Rockford Peaches, which is lead by a down-and-out former Major Leaguer (Tom Hanks), whose drinking problem not only destroyed his career, but his knee as well when he jumped from a hotel window to escape a …

There are some good performances to be found here. Tom Hanks - reunited with Director Penny Marshall (they worked together previously on "Big") offered his usual high calibre performance as Jimmy Dugan - an alcoholic ex-baseball star who (against his will) is assigned to manage the Rockford Peaches. Geena Davis was great as Dottie Hinson, the Peaches catcher and - as Dugan describes her - "the best player in the league." I was also impressed by Lori Petty as Kit Keller, Dottie's little sister. In a relatively brief role through the first half hour or so of the movie, Jon Lovitz was entirely believable as the scout (Ernie Capadino) who discovered Dottie and got her to agree to play. Several other "big" names appear - most notably Madonna and Rosie O'Donnell as teammates on the …

No posts have been made on this movie yet. Be the first to start talking about A League of Their Own!