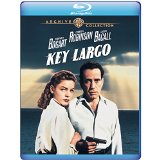 Plot: A hurricane is coming into the Florida Keys. Which is where a former soldier is looking for his dead friend's family. -- sapien

The best parts of this classic noir are when the whole group of characters are cooped up in a storm-assaulted hotel. The ending is a little anti-climactic, given the drama and tension that went on before, but it is a necessary conclusion. The supporting cast are great, especially Lionel Barrymore and Claire Trevor.

Great movie from start to finish

From beginning to end, this movie was excellent. I already knew that Bogart and Robinson made good movies. But now, I'm gonna have to check out some of Barrymore's and Bacall's work.

A ruthless mobster and his gang hold a group of hotel guests hostage during a hurricane on the Florida Keys. Another Noir from John (The Maltese Falcon) Huston featuring the classic pairing of Bogart and Bacall, this film does not quite live up to the promise of these ingredients but that's a hell of a pedigree to live up to. Making Bogart a do-gooder war hero and Bacall a doting widow takes the edge off their usual cynical, hard-bitten sparring and this overly wholesome approach means that the crackling chemistry they have shown in their other films is compromised. Robinson and Claire Trevor as his soused moll provide the best moments and his sneering diatribes against Bogie's moral stand are great. The hurricane enclosed setting makes for a nice pressure cooker environment in which the …

My Top Movies of 1948 by Indyfreak

No posts have been made on this movie yet. Be the first to start talking about Key Largo!