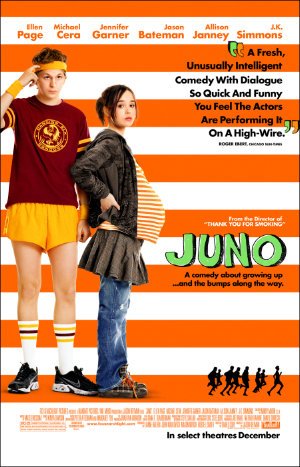 Plot: A young girl is pregnant and doesn't want the baby. She decides to give it up for an adoption, but meets the future parents before the baby is even born. She struggles with the adoption as do the possible future parents.

Benefits largely thanks to its clever writing and terrific performances. "Juno" is an essential teen comedy from the 2000s.

The story is about a young girl is pregnant and doesn't want the baby. She decides to give it up for an adoption, but meets the future parents before the baby is even born. She struggles with the adoption as do the possible future parents. This movie has one of the best writing of 2007.

Juno is one of those movies you can't help but like- it's very funny and quirky and even a little sad at times. It also teaches us, yet again, that life is not black and white- there are so many gray areas people are forced to sift through and first impressions are not always correct. I have a feeling it'll be a classic someday.

Juno is a sixteen year old high school girl who sleeps with her geeky boyfriend and winds up pregnant, so she decides to put her unborn child up for adoption. I'm sure there are plenty of film-makers out there who think making indie movies is easy; just a case of the emperor's new clothes. If you make it LOOK like it's being clever, people will just assume that it is. But the fact is, the indie film is one of the great bullshit detectors of the cinematic medium. There are no special effects, no car chases or action to hide behind. If the script is no good, the film will suck. Full stop. Juno has a script full of characters that feel like real people having real conversations, and even the most unsympathetic ones are shown to have qualities that you can understand or relate to. It's warm …

A 16 years old highschool student Juno MacGuff (Ellen Page) gets pregnant by her best friend Paulie Bleeker (Michael Cera). A frend of Juno, Leah (Olivia Thirlby), helps her find parents who adopt babies and was able to decide on a successful couple named Mark and Vanessa Loring (Jason Bateman and Jennifer Garner). Her father Mac (J.K. Simmons) accompanies her to the couple and the straightforward stepmother Bren (Allison Janney) goes with her during the ultrasound. The screenplay, direction and acting were superb. The only qualms I had were character development particularly Vanessa, who we donât know her background or actual work is. Another is the situation when you have an eccentric pregnant kid visiting a married man, which doesnât adds up since she already made her first …

No posts have been made on this movie yet. Be the first to start talking about Juno!