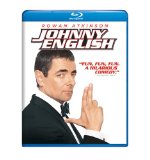 Plot: There's a Frenchman after the crown jewels and the throne itself and the clumsy Johnny English is on the case.

'Johnny English' is the dead horse of a tired genre. Rowan Atkinson is basically doing a mixture of Mr. Bean and Blackadder.

Some good gags spread out and Atkinson is always entertaining, but the rest of the film is weak in all other regards and it's much too stupid in parts.

I ADMIT IT. THIS IS ONE OF MY GUILTY PLEASURES. IT'S A SLAPSTICK COMEDY, AND WHO CAN DO IT BETTER THAN ROWAN ATKINSON...MR BEAN AS I'VE KNOWN HIM. IT'S BEEN AWHILE SINCE I'VE HAD A GOOD LAUGH....I MEAN A GOOD, BOISTEROUS, TUMBLE-OVER, BELLY-SHAKING, GASPING-FOR-BREATH-AND-ABOUT-TO-CALL-911 TYPE OF A LAUGH... I REALLY HIT THE CEILING WHEN IT GOT TO THE LAST PART WHEN JOHNNY ENGLISH (ATKINSON) ATTEMPTED TO PULL THE FACE OFF OF THE ARCHBISHOP OF CANTERBURY, THINKING HE WAS A FRAUD. TO ADD INSULT TO INJURY, THE POOR SERVANT OF THE CHURCH OF ENGLAND HAD TO PULL HIS PANTS DOWN TO REVEAL HIS PALE BUTT TO THE WORLD! THIS WHOLE FILM IS JUST RETARDED....... GO SEE IT !

One of the Worst Kids' Films in Recent Memory

If I didn't feel like ruthlessly tearing this film apart at the moment, I could simply copy and paste the majority of my review of Shawn Levy's The Pink Panther, as many of my points in that review apply to Johnny English (not to mention that both films are nearly identical). And yet, Johnny English is even worse, and while at least the Pink Panther provided a meager handful of infrequent chuckles, Johnny English has little to no working gags. Once again, I am disgusted by the low standards of live action children's cinema- that is, if I dare to refer to this inexcusably terrible piece of formulaic tripe as cinema.

There's hardly any plot in Johnny English. The majority of the film is made up of loosely related action/comedy scenarios that are neither exciting, nor comedic. The …

No posts have been made on this movie yet. Be the first to start talking about Johnny English!