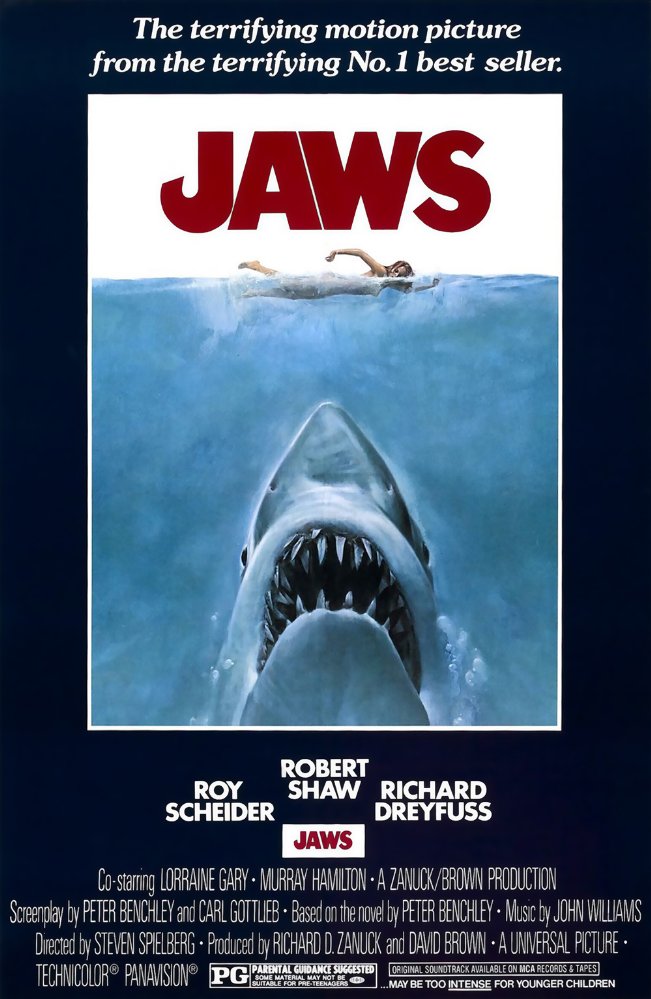 One of the few movies that is better than the book. A terrifying horror film that makes you caution going into the water. Brilliant performances from the lead cast (Roy Scheider, Robert Shaw and Richard Dreyfuss) and a memorable score from John Williams. Despite the troubled production, this is still one of Spielberg's finest movies.

Still as chilling today as it was in 1975, "Jaws" forever made audiences afraid to go into the water.

Witnessing in the 70s and 80s how Spielberg and Lucas redefined Blockbuster filmmaking and still be alive to tell it must be a lucky achievement. Sure, Spielberg is creating a new fear and establishing his great (early) directorial skills through Jaws, certainly not his best film and not as scary for today's gore-filled movie-goers, but brilliance is brilliance. Williams does nothing more than increasing the atmosphere of this terrific classic. 93/100

The second-half of the film is unforgettable. I felt like it was 10 minutes too long. But, we needed that time to build up to the climatic fishing trip. Now, for as good as this film is, it also ruined the film industry, or at least started the decline. This film broke all the rules, such as you can't release a film that does not have a bonafide star and you can't release a film in the summer. Spielberg did, and he won. But, with this film, and then with Star Wars 2 years later, the American film industry only wanted to release summer blockbusters, with the occasional Oscar bait thrown in, now we've gotten to the point that the summer has basically become the dumping ground for bloated CGI-ed crap.

John Williams' score is also near-perfect and he won the Academy Award for it.

Maybe the Shark Did Work?

This film in particular may be the perfect example of how the limitations of making a movie during a specific time period can enhance a film tenfold. Steven Spielberg did not need any extravagant special effects for a film that may very well have been the first summer blockbuster. All Spielberg needed was every single problem that a director can experience on a set and a shark that could not work. The film looks fantastic with it's beautiful point of view shots of the ocean and the fictional community of Amity Island. It makes me wonder whether or not this film would have been as good if the shark worked. Many people tend to side with the negative half of the argument. All I know is that this film is well shot, well acted, and well paced....not to mention this film has what may very well …

Few creature features are as thrilling and suspenseful as Steven Spielberg's classic Jaws. He knew what he was doing when he adapted Peter Benchley's bestseller for the big screen.
The backdoor production problems were infamous but as history showed, it was all worth it as Jaws became the first true blockbuster of the modern Hollywood era and it remains among the best. This is doubtlessly the result of the combined talents of Steven Spielberg, the trio of talented actors (Scheider, Shaw, and Dreyfus), and John Williams for his famously chilling score.
Sure it may have spawned a slew of imitators and a series of mediocre-to-terrible sequels, but the original film itself has not lost its touch. It's amazing how well it's aged and how it remains so effectively suspenseful.

No posts have been made on this movie yet. Be the first to start talking about Jaws!