I'm Not There Movie Information 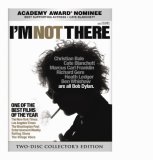 Plot: A unique biography of Bob Dylan where different characters act out several personalities of his character traits.

"I'm Not There" pastes together a collage of music icon Bob Dylan's career. What makes it so interesting is its peculiar approach and combination of styles.

The most incomprehensible biopic. I watched this with the intent of learning more about Dylan and his music and be entertained. I got none of that. This is one of the most blatantly 'arty' movies I've witnessed, who's random jumbled scenes never add up to anything. I've tried to like Dylan's music, but it's never grown on me. I find this movie to be the same experience, but on a more frustrating level. Maybe Dylan fans will get something out of this, but everyone else will not.

A sometimes cool but frequently disjointed film that gets back to Haynes' previous style (a la Velvet Goldmine), it boasts some fantastic performances (especially from Marcus Carl Franklin and the beautiful goddess Cate Blanchett) but is ultimately hard to follow and frankly dull. Only Blanchett and Franklin succeed in portraying Dylan with any real warmth or charisma, and without that, why watch? For true Dylan fans only. Anyone else is likely to be bored.

I thought it started off really well because it instantly grabbed my attention. I don't know much about Bob Dylan so I was really interested about how the filmmakers would interpret his life, and maybe I could even be inspired to learn more about the actual person. Things started to go downhill when Cate Blanchett appeared on screen. No, it's not that she's bad in this film; in fact, I think she's one of the best aspects of it. It's just that the things that went along with her, such as the multiple storylines, weren't interesting enough to keep my attention. I wished that they told the story in a linear fashion instead of making cuts here and there because it was too distracting. Other than Cate Blanchett, I wanted to see more screen time from Ben Whishaw, Christian Bale, and Heath …

A true visual mosaic, this inventive and unconventional biopic weaves in and out of the stories that make up both Bob Dylan's mind and life. Todd Haynes directed and co-wrote this ambitious project as a meditation on the peerless singer-songwriter's (to say he transcends this label is a gross understatement) influences and exploits as they worked their way into his poetry and into our mythology. The essence of Dylan (his name is never mentioned in the film) is molded through six inter-cutting portrayals, each focused on a particular aspect of his evolution. A young African-American train-hopper, played impressively by an enthusiastic Marcus Carl Franklin, is Dylan's formative years, the Dylan reaching out for Woodie Guthrie and anguishing over his developing voice. Christian Bale is a …

Top 40 Films of 2007 by CarnivorousCouch

I enjoy most of Bob's music, but this movie makes no sense what so ever.&amp;nbsp; I could not finnish it because I could not figure out what was going on right from the first few minutes.

I love Bob Dylan, and with the exception of Cate's Bob Dylan, I could care less. It would have been a lot better had Cate been the only Bob. Richard Gere's character was among the strangest, most out of place, and boring.

Why do people like this movie?&amp;nbsp; For those that have seen it and liked it is it because you are music fans or Bob Dylan fans - or that you think it is good?