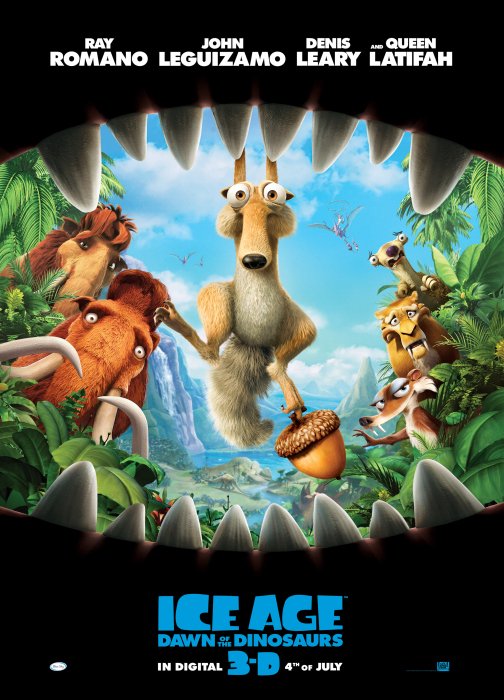 Plot: First came the Ice Age, then The Meltdown and now a new age approaches. With Manny and Ellie expecting a baby, and even acron-loving Scrat finding a potential love, Sid finds himself in need of a family. But when he steals some dinosaur eggs to reach his goal, it leads him to a dangerous underground world.

By Far The Funniest Ice Age Film With fantastic animation, A great cast (Pegg as Buck was hilarious), A unique story, And strong humor. Dawn Of The Dinosaurs is a hugely satisfying entry in the Ice Age franchise. Rating: Fresh

If 'The Meltdown' was a misstep, then 'Dawn of the Dinosaurs' is a bust. The family dilemmas hold no weight or solid reasoning to the characters besides the typical "I'm anxious and over-protective for my child". Story is completely one note, with the core ensemble serving as hollow stereotypes of their former selves using gags in place of personality. Simon Pegg manages to make a typical stock wildcard character seem entertaining despite his many overdone (to death) jokes. There's no attempt to make a good film. The best moments - and ONLY laughs - come from the continued short side plot of Scrat the squirrel. If it weren't for this likable funny character, I'd have forgotten the entire movie. An empty experience.

Good animation but not very good.

I was a little bit hesitant about seeing another Ice Age movie because over the years it's very rare a third installment has anything new to offer. But surprisingly enough this one did. And bringing that old humor back is probably the best thing that ever happened to this movie. The comedy is light at the beginning and then it becomes totally intense and then becomes light again towards the end. So what I&#8217;m saying is they totally balanced it out. I&#8217;m also glad that Syd wasn&#8217;t given the burden to carry this movie with his slapstick antics they&#8217;ve got new ones to that for him. Also Diego being good didn&#8217;t feel awkward and I like the subplot for his character. Manny the mammoth has become a little bit soft though but then again who doesn&#8217;t like Ray …

No posts have been made on this movie yet. Be the first to start talking about Ice Age: Dawn of the Dinosaurs!