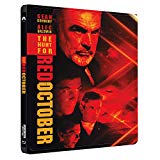 Plot: When Marko Ramius goes rogue and takes a revolutionary nuclear submarie to the U.S. the government is quick to judge him a threat, but CIA analyst Jack Ryan believes he is defecting. With the Russian and American navy both after the sub, it's only a matter of time before tough decisions will have to made on everyone's part. -- Chris Kavan

The first Jack Ryan film is a more thoughtful and political film than the more action-oriented, Harrison Ford-starring films to follow. The cat-and-mouse game between Connery and Baldwin comprises a large portion of the film and is the best part of the well-directed, tension-filled movie.

I was suprised how much I liked this movie

A better-than-average thriller thanks to Sean Connery and Alec Baldwin (perhaps his best role to date?). The movie is tense and never lets up. Though Harrison Ford would take over, this first Jack Ryan adventure is pretty good.

"The Hunt For Red October" by Yojimbo

When a soviet captain commanding a first strike nuclear submarine decides to defect, CIA analyst Jack Ryan is sent in to prevent catastrophe at the hands of the pursuing Russian forces. Alec Baldwin was always a bit of an also-ran as an action star, but his lone outing as Tom Clancy's Ryan is also easily the best. He is perfect as an academic unwillingly sent out into the field but it is obviously Sean Connery's towering presence that makes the film. The two head a very strong cast in this attempt at cinematic glastnost, as for the first time in a long time the simplistic gung-ho flag waving of the 80s is left behind and the Russians are shown as human beings, not the fanatical warmongers they had been portrayed as in Hollwood movies thus far. John McTiernan also provides some very slick …

All in all, a mind-blowing film!

The Hunt for Red October(1984) was the debut novel of now renowned thriller writer, Tom Clancy and is generally considered to be a landmark novel in the espionage/thriller genre. This film, which is more or less a faithful rendition of the novel on screen, while in no way the masterpiece the novel was, is no doubt a brilliant piece of cinema and a welcome change from the usual thriller film involving guns and/or explosive, often glorified violence. There is a more intellectual side to the Hunt for Red October. It tells the tale of a cat-and-mouse chase that takes place beneath the ocean surfaces, involving nuclear submarines and the tension that nearly threatens to bring the world to the threshold of nuclear war. Sean Connery, well-known as the first portrayer of James Bond on the big …

This used to be a Top 10 hit for me but it has lost a little of its luster.........still a fantastic movie though. In the first installment of the Jack Ryan series it is filled with excitement and has a stellar cast. Alec Baldwin plays Ryan and although he is no Harrison Ford he is plenty better than Ben Affleck. He does a good job here and I've always thought he was a good movie lead and never understood why he didn't get more roles. As good as he was this is still Sean Connery's movie as he was on top of his game playing the Russian submarine captain. Scot Glenn, James Earl Jones and Sam Neill are great in supporting roles in this Cold War thriller. Even though it has dropped some over the years I don't figure it to drop out of my Top 100 ever and #39 overall is nothing to sneeze …

No posts have been made on this movie yet. Be the first to start talking about The Hunt for Red October!