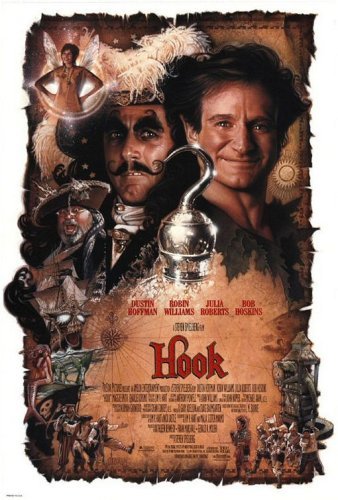 Plot: An adult Peter Pan has long forgotten his time in Never Never Land and is now a lawyer. When his children are kidnapped by Captain Hook he must return to the realm and recapture the magic in order to save them. -- Chris Kavan

It's a harmless family film.

Steven, didn't 1941 teach you anything...? A huge cast of stars chew the scenery in Spielberg's painfully self indulgent take on the Peter Pan story. The "streetwise" lost boys are annoying and it's soaked in saccharine, but some of the set pieces are entertaining and Hoffman is amusing as Captain Hook.

Skip it and watch the Disney version

If there's one classic that I think has the most potential to be a masterpiece, Peter Pan is it. Disney did an admirable job with their animated adaption, and Dave Barry and Ridley Pearson have written a marvelous book series about Peter Pan. Hook, unfortunately, isn't nearly as good as it should be. It's silly premise, lack of comedy, and long length this a considerably lesser Pan-tale.

Peter Banning has long since forgotten his childhood as Peter Pan, and is now a middle-aged lawyer who puts work before family (and is severely afraid of heights to boot). But when his kids, Jack and Maggie, are kidnapped by Captain James Hook, Peter is forced to remember his life at Neverland, and learn to best Hook and save his children.

One of Hook's many problems is that it's a children's …

Ruffio? Thud Ball? What more could you want?

What if Peter Pan grew up? What if he became like the adults he always hated? What if he married? Had kids? Became a lawyer and a workaholic? What if cared more about his job then his kids? What if Captain Hook kidnapped his kids and he had to remember who he was? And how did he come to Neverland in the first place? All these questions are answered in Steven Spielberg's most panned film: Hook.
I saw this movie in the theater when it came out. I thought it was great at the time. Just about anything that Robin WIlliams was in was a hit with kids, and this was no exception. Over the years people have decided to rip this movie apart because it is a different variation on the idea of Peter Pan, but over all I thought it was a fun story. Dustin Hoffman played a great Hook, Bob Hoskins …

Top Films of 1991 by Neobowler

No posts have been made on this movie yet. Be the first to start talking about Hook!