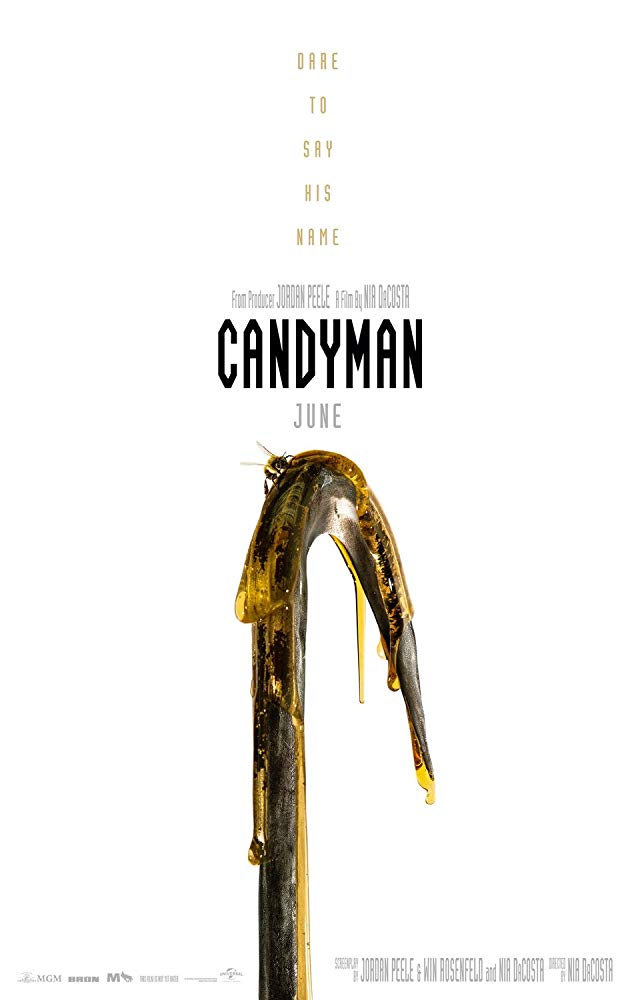 Plot: Chicago's Cabrini-Green may be gone, but some ghosts remain. In the now-gentrified neighborhood, visual artist Anthony McCoy's obsession with one such ghost - the legend of Candyman - leads to new revelations and trauma. -- Chris Kavan

I don't care if the movie has an agenda, I just want to be scared and while the film evokes a feeling of dread it moves quite slow and most of the brutal bits are kept off screen. Still, I do appreciate how it ties things together and the shadow puppets are a nice touch.

This quasi-sequel to the revered 1992 horror movie Candyman certainly has a reverence for the original movie. Nia DaCosta's direction does try to lend it a some atmosphere. It's a good looking horror movie. But it's not quite as scary as the first movie. It doesn't help that Candyman as a a presence is not in the movie that much. The new cast is not bad. Yahya Abdul-Mateen II is solid as an artist who becomes obsessed with the monster turned urban legend. Supporting actor Colman Domingo is a a standout in the cast. If it had more scares and showed more of the gore, perhaps it would fare better.

Solid acting, great body horror, and fantastic visuals, especially the paper puppets sequence. I like how this movie takes the Candyman legend and makes the point that every generation of racism has its own Candyman tragedy of injustice. Despite saying all that, I found the rest of this movie so forgettable and nowhere near as effective as the 1992 movie.

Okay so I'll say that I was hyped over this one all summer long I had been excited since I saw the previews but I'll say that I was a little let down here the movie isnt all that scary and moves like a snail I'm saddned that this is the way it is cause it could have been and being made by Jordan Peele it really should have been a wonderful film.but oh my God this is just a shitsterpeice it had everything going for it it had the hype it had the fact that it was close to October it had an amazing creator but it just doesn't work here I wish it had but sadly guess not I can't say it's a total let down cause I enjoyed it as what it was a mystery not a horror movie I wish it would have worked as what it was billed as which was a scary horror film I give it a 7 out of 10

No posts have been made on this movie yet. Be the first to start talking about Candyman!