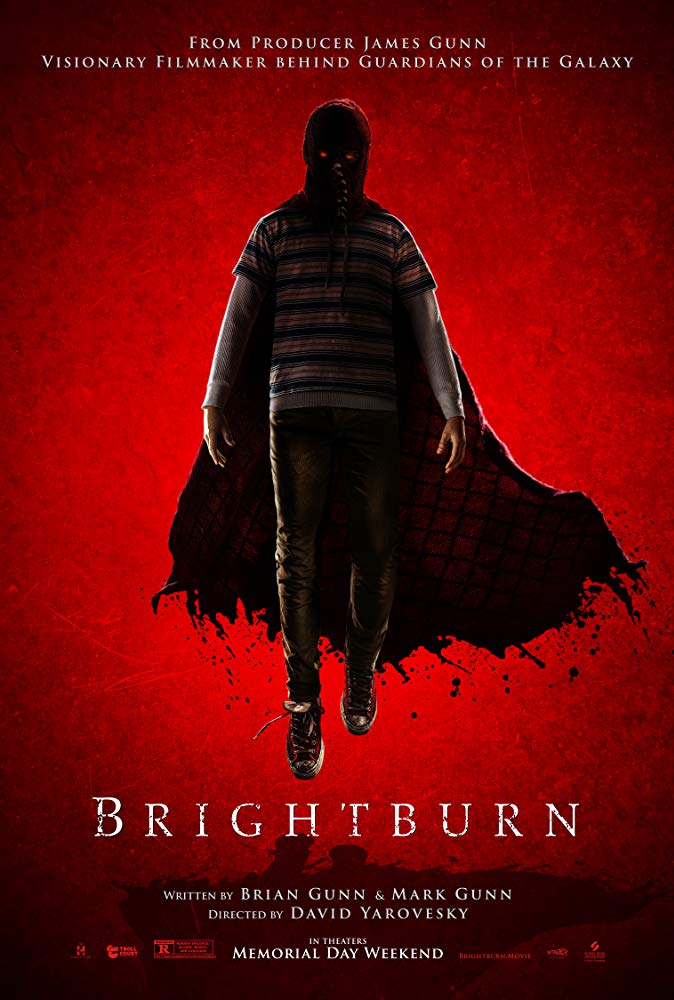 Plot: A childless couple think they have had their prayers answered when a ship crash-lands from a distant planet and they take care of the child inside. But this dream turns into a nightmare when he develops spectacular powers - and uses them for pure evil. -- Chris Kavan

This anti-Superman horror posits the question of what would happen if the child sent from another planet happened to go psycho once he hit puberty. Plus Jackson A. Dunn plays the part perfectly going from sweet boy to stone-cold creepy kid in equal measure. While it could have done more, it plays well enough - and doesn't wimp out in the end. Oh, and make sure to stay awhile post credits for an excellent Michael Rooker cameo that is too good to miss.

While attempting to subvert one genre, "Brightburn" crashes into a different one. This transgressive take on a Superman-style origin story downplays its premise as yet another predictable demonic child picture with clueless parents.

I thought this anti-superhero film was fabulous.

Superhero-movie-haters unite. Run to a nearby movie theater to see this movie. Because âBrightburnâ is the ultimate anti-superhero-film of all time. The moment I realized which direction it was going, I cursed myself because after seeing âAvengers: Endgameâ Iâd decided to have a little sabbatical. I was going to avoid movies with characters in tightly fitting latex suits and superhuman powers. But as it became clear that it wasnât what I expected, my enthusiasm grew all the more. My enthusiasm for films such as âDeadpoolâ and âAnt-Manâ (because of a touch of whimsy and the originality) was effortlessly overtaken by this highly original anti-superhero film. And if one also mixes the superhero genre (of which they are continuously …

When 'Man of Steel' first crash landed in cinemas, one of the biggest backlash that the movie faced was Superman causing more collateral damage than the main villains - making him seem heroic instead of a creepy alien.

'Brightburn' basically takes some inspiration on 'Man of Steel' reception and ask "what if Clark Kent was a serial killer" with the Gunn family having heavy involvement in the writing.

Although the concept is interesting, but the exaction is seriously lacking and rather disappointing.

The movie was surprisingly short and I wish it was a little longer to expand on reasons why the kid turns evil. The performances from everyone was fine, but Elizabeth Banks playing the delusional mother in a horror movie is a repetitive trope, and makes …

No posts have been made on this movie yet. Be the first to start talking about Brightburn!