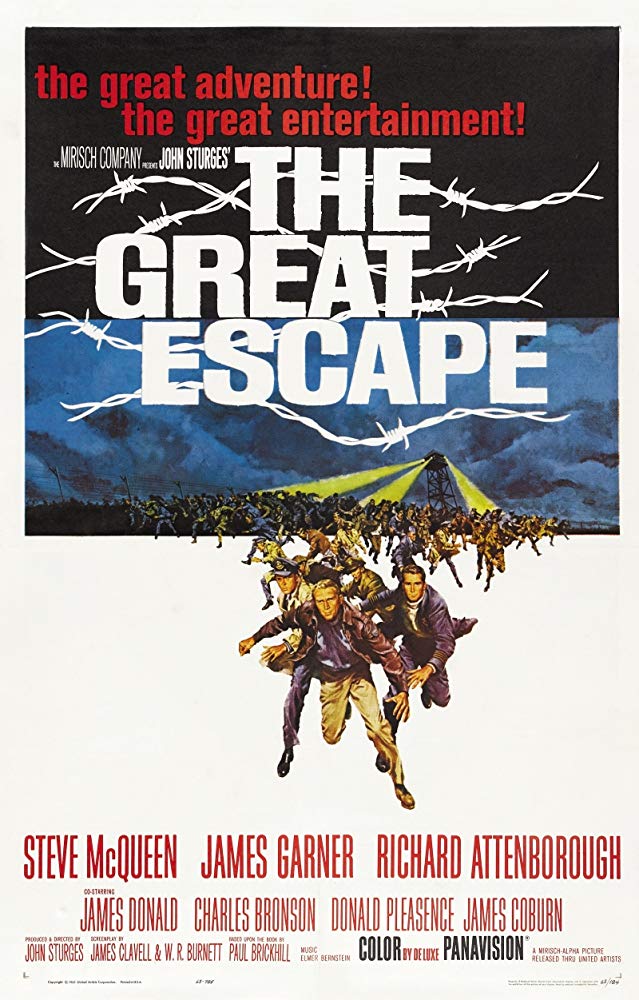 Plot: Set in a POW camp in Germany during WWII, many American's plan a massive escape plan trying to reach England or a neutral country.

John Sturges directs one of the quintessential war films - a movie that juggles a large cast of characters, while still giving them all memorable screentime. The film tells a true story without pulling any punches and doesn't replace a brilliant combination of triumph and melancholy with a Hollywood ending. The score and cinematography are beautiful and serve to underline the action, but the talented, multifaceted cast is the real attraction here.

'The Great Escape' is simply a great film. McQueen's best by far.

I was thankful that this movie still held up on its second viewing years later. Still a mandatory guy movie. However, it is still LONG, and the second time around you begin to notice all the little things that could have been cut. But then the fun of the escape would have been over sooner...

It's not often that I approve of an older WWII film, because they tended to derail from the actual story; made things seem less dangerous than what they really were. This is not the case in The Great Escape. Although not violent, it is realistic and I respect it for that.

Where to begin with this great classic?
The acting in this movie is magic. All around are great performances from actors I have never even heard of. The dialogue is mature, as expected, but it also has a tweak of humor in it. Like Captain Hilts' arguments with the German officers.
The supporting cast is a huge help in the majority of the movie. Almost every character has a separate personality or has some form of fear or danger to overcome, add the tension of a concentration camp to that fear and you've got some …

Historical accuracy was authentic and the score was majestic and vivacious. Methods of their escape were ingenious while the menâs cooperation and camaraderie were in full display. Pace of the film was slow during the …

"The Great Escape" by Yojimbo

Based on the true story of a mass break out of Allied POWs from Stalag Luft North, The Great Escape is THE prisoner of war film. This particular camp is populated with an all star cast of thespians, film stars and character actors alike in a story of good old British stiff upper lips and ingenuity. The first half of the film is all about camaraderie and pulling together in adversity with plenty of knockabout humour and easy going charm; even the Camp Commandant is shown as not a bad sort as he is distanced from the Nazis represented by the SS and Gestapo. The second half is a darker affair as the escape begins in earnest and we follow each of the multinational groups of men as they try to make their way through enemy territory. All of the impressive cast pull their weight (although James …

No posts have been made on this movie yet. Be the first to start talking about The Great Escape!