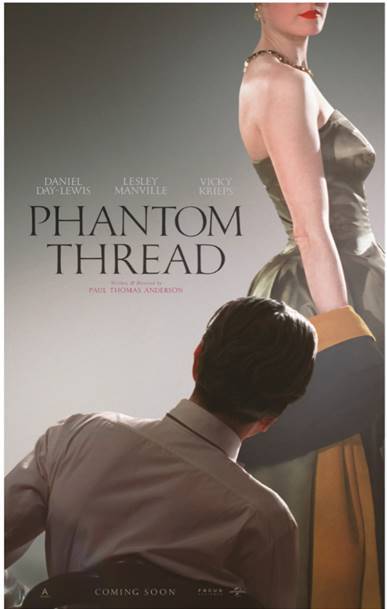 Plot: In the 1950s London fashion scene, a dress-maker finds himself designing for both high society and the royal family. Based on the true story of Reynolds Woodcock. -- Chris Kavan

Always slow moving, but never without grace, "Phantom Thread" is an elegant period romance about an artist's obsession that's made all the more special by Daniel Day-Lewis' career-punctuating performance.

Slow, ponderous, and of course it becomes interesting in the last twenty minutes. Perhaps I missed the point but it was mostly boring.

Day-Lewis' riveting performance is a consistent highlight in a movie that doesn't quite match the previous stronger efforts from Paul Thomas Anderson.

âPhantom Thread â might be the best film I think I have ever seen. Superb in every sense of the word. It's up there with âThere Will Be Bloodâ. For the last couple of days after I watched the film, there was something about it that transcended me into a spell. It felt like a dream. An extraordinary incident was watching this a second time in one week, which is something I rarely do. Better on the second watch, if I must say. Gripped ever tighter in itâs sinister approach to love.

What could've been so boring with its subject matter of the fashion world, something Iâm not personally interested in, but made it so fascinating. If you watched the trailer and think you know how things are gonna play out, youâre dead wrong.

Paul Thomas Anderson is one …

Weaving the Facets of a Character

One of the greatest living directors, Paul Thomas Anderson, doesnât disappoint at directing one of the greatest living actors, Daniel Day Lewis, in what is supposed to be his latest performance. Phantom Thread tells the story of Reynolds Woodcock (Day Lewis), a dress maker and fashion designer as he meets and falls in love with Alma (Vicky Krieps), who at first finds him alluring but with time starts growing continously disenchanted with Woodcockâs form of living. The film shows quickly shows its prowess as a thorough character deconstruction and a fascinating period piece into a world which doesnât get much focus on the cinema landscape.

The first weâll be looking at is of course the performances, and it goes without saying that Daniel Day Lewis delivers a homerun with this …

No posts have been made on this movie yet. Be the first to start talking about Phantom Thread!