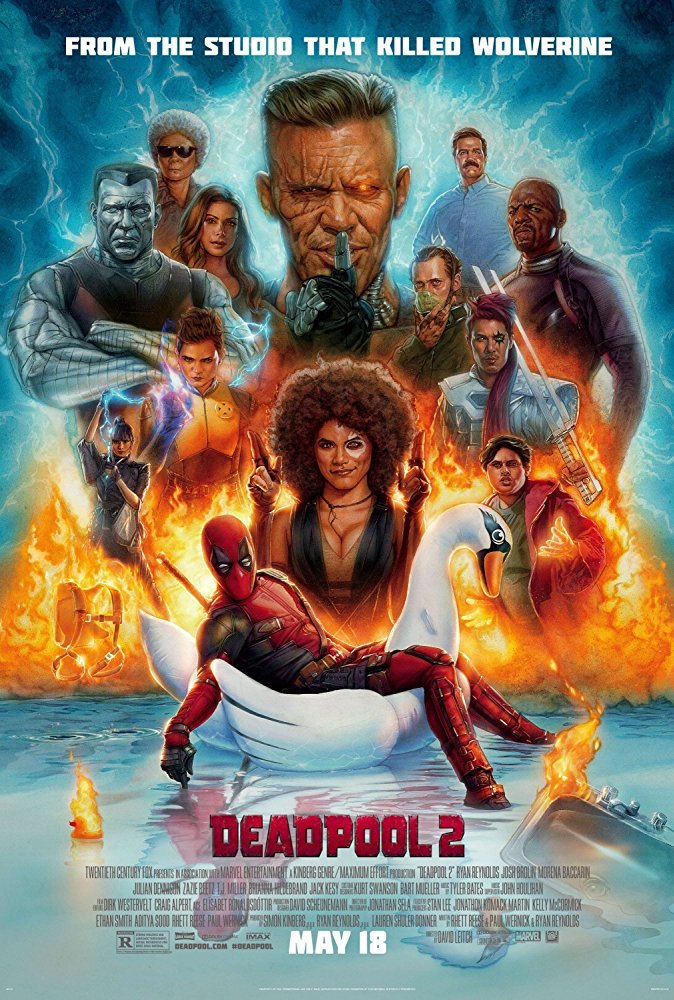 Plot: Cable, an exceptionally deadly mercenary mutant from the future, comes back in time to hunt down a child. Despite the fact this fire-based mutant is hell in a handbasket, it turns out Deadpool has a soft spot for the brat and, with the help of the derivative X-Force, will pull out all the stops to ensure his survival. -- Chris Kavan

Managing to be slightly better than the first movie without even looking like it's trying to, "DP2" brings back what made the original so much fun, while further shaping the character of Wade Wilson.

Better than expected, for a sequel. Still pretty smart, funny, and irreverent.

Packed with more XMEN characters, bigger action scenes, and zanier humor, DEADPOOL 2 proves superior to its riotous predecessor. Ryan Reynolds continues riffing the entire superhero genre while Josh Brolin grunts and growls as the time traveling cyborg Cable. His arrival to kill a mutant child thrusts Deadpool into action to prevent it from happening. The Easter Eggs and in-jokes speed by like rapid fire from a machine gun. The scale of the action scenes (especially a thrilling convoy chase) are a vast improvement. The story goes in directions you wouldn't expect for a superhero sequel and it takes chances you later applaud it for.

âDeadpool 2â is a massive improvement over the first in terms of film making and having more freedom to go balls to the wall. Not feeling so contained. Having more laughs and soul in this serious drama about the âFâ word. Well thatâs what Deadpool thinks. A lot more ruthless when referencing other movies or other source materials surrounding this movie.

Now my main issue from the first movie is how colorless and bland the film making was. Something lacking or anything stuck out as memorable in terms of visual comedy. This time itâs directed by David Leitch, best known for John Wick and Atomic Blonde, who added a lot of his mystical tricks into this. How Leitch filmed the action scenes was slick and flowed smoothly. Especially in the musical numbers …

Sequels so often fall short of expectations, I can probably count on both hands how many are worthy. Deadpool 2 is going to join that list. As violent, crude, hilarious and fourth-wall breaking fun as the original but with the added benefit of some kick-ass new characters including Josh Brolin's time-hopping mercenary Cable, Zazie Beetz luck-based Domino and Julian Dennison as the overlooked and angst-filled Firefist - throw in some fantastic cameos, one-liners and just enough heart to hold it all together and Deadpool 2 is a sequel worthy of your time.

Deadpool 2 doesn't take any time in throwing in references, with a nod toward Logan right at the start letting you know the wink-wink jokes about those other superheroes (from X-men to Avengers to even the DC universe) are going to …

No posts have been made on this movie yet. Be the first to start talking about Deadpool 2!