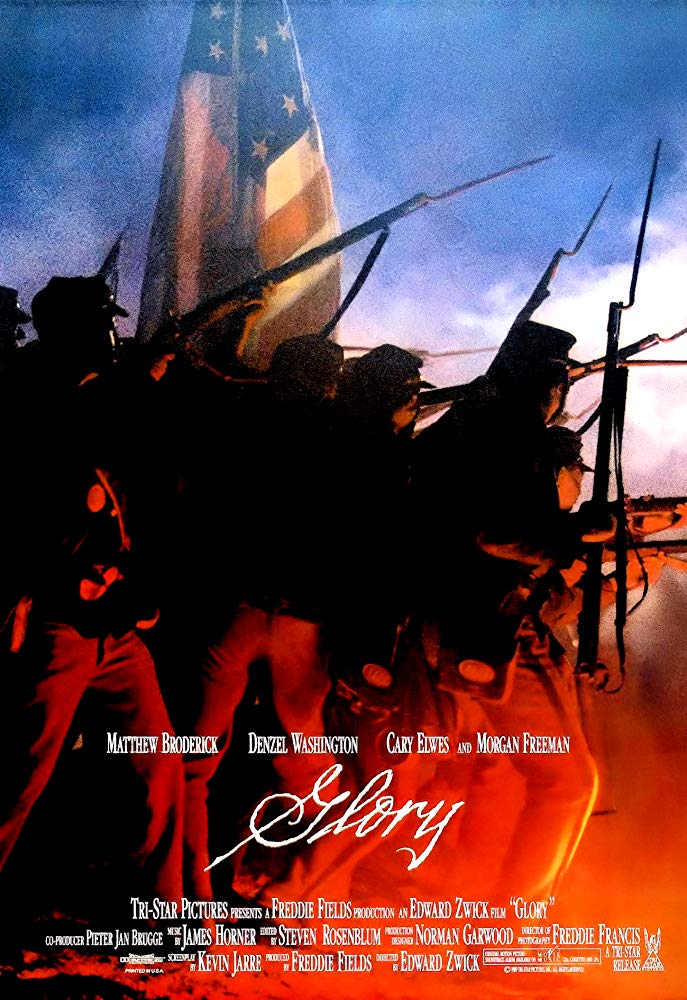 Plot: The first all black volunteer army is confronted by hatred, racism and fear from both the Union and the Confederates. A white man is in charge of controlling the company.

This is the best film made about the Civil War, in my opinion. It capture the tenuous racial climate of the times, while featuring some powerful and moving performance from an all-star cast. The ending is incredibly poignant and emotional. The relationship between Matthew Broderick and Ande Braugher's character is especially captivating.

A good depiciton of the Civil War. The story of the first all black volunteer infantry is told in a more truthful manner and manages to make routine moments not feel cliched. There are certain parts that are very effective and the film still holds an inspirational grasp despite not having a winning outcome.

OMG... I cannot watch this movie without crying my eyes out. This is really an amazing movie. Great cast, great director just great everything and Denzel (looking gorgeous as ever) was definitely on top of his game.

I want to make it clear that the score I am giving Glory means little to nothing. The reason for that, is because I honestly have no idea how to score this movie. I don't feel like this is the kind of movie that's made to entertain. It's made to make people appreciate what 54th Regiment did. It's a powerful movie, but I didn't find it to be very entertaining. I repeat, I don't think this movie was made to entertain. It exists as a history lesson, albeit, a very powerful one.

Glory takes place during the Civil War. Robert Gould Shaw has been asked to lead an army of black men, the 54th Regiment. Finally getting a chance to do something important, many black people volunteer to be a part of this. Glory is the tale of the 54th Regiment's long, hard journey to battle.

Glory is the story of a white liberal Bostonian Colonel who headed the first black regiment in the Union army. Like most of this kind of worthy and well meaning historical dramas, Glory is a little patronizing and guilty of emotional manipulation, sometimes descending into schmaltz. What makes the film however is the strong cast, particularly Denzel and Morgan Freeman who share all of the best scenes; particularly when the regiment are ordered to put a civilian Southern town to the torch, and when Freeman finally steps up and puts mean spirited, smart mouthed Denzel in his place. The battle sequences are also well staged and grittily realistic, the final attack especially is well worth the wait. Matthew Broderick didn't entirely convince me as a leader of fighting men, but as a whole …

Civil War at its best!

Every time I see Glory a tear drops from my eye as it is such a tearjerker, especially for a war film. It's like Dead Poets Society but with guns and it's set in the Civil War. It's not everyday you'll see Matthew Broderick in a good film, well actually any film come to think of it, but in the 80's he was hot property after Ferris Buller's Day Off, War Games and Project X but Glory was by far his best performance of his career. Let's remind ourselves though that it just wasn't Broderick who got praise out of this, there was also Morgan freeman, Denzel Washington who thanks to this got his first look at Oscar glory and Cary Elwes. The music is soaring and the battle scene at the end is one of the most emotional and patriotic scenes I have ever seen and I'm not an American but I don't …

No posts have been made on this movie yet. Be the first to start talking about Glory!