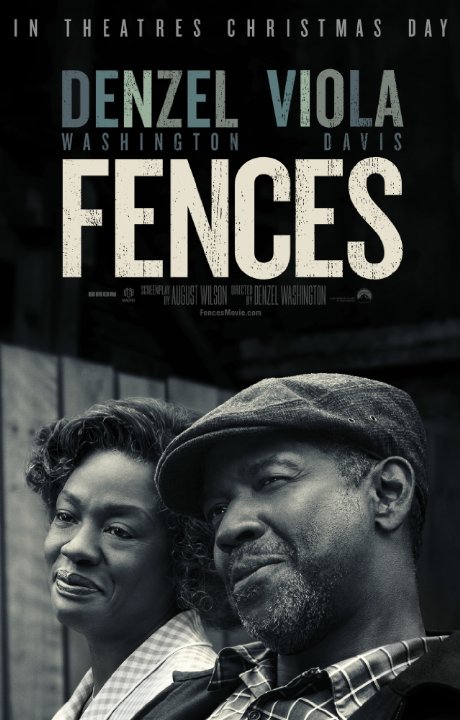 Plot: Based on the award-winning Broadway production. Fences follows the life of Troy, an African-American father and husband trying to cope with race relations in the 1950s while also coming to terms with his own life. -- Chris Kavan

Denzel in Fences delivers a force of nature acting performance, that is probably Wahingtonâs best performance ever. He creates an wholly-realized character that you will simultaneously hate and sympathize with. If you need any further proof that Denzel Washington is one of the great actors of all time, he just gave you a masterful piece of evidence. As for Viola Davis, all i can say is that she is owed an Oscar, and is currently the odds-on favorite to win an Academy Award at the time of me writing this review. Fences is her magnum opus. She has already won a Tony for this role and it's not hard to see why. Davis brings a no-nonsense nature and a stubborn belief in family to the portrayal of Rose, and sheâs the soul of a great film

Interesting adaptation, great characters, however I feel like after while I look at the acting and say to myself why is this happening? Oh yeah, we need awards. A strong 2.5 out of 4.

'Fences' is what I call an "actors movie". Great acting all round, good story, and a easy straight forward narrative. Other than that, it falls flat. Denzel directing is bland and the film has a lot of pacing issues, as I felt the runtime. Of course this was based on a stage play and it sure feels like it even watching it. Because every monologue has to be shout and be big like a stage performance, but at the same time fits certain characters. Kind of a mix bag really.

You could say the main goal was to make it look and feel like a play. I mean, many movies have done it, but did it so much better. It got pretty repetitive after awhile and has a rusty flow.

While a movie adaption of …

No posts have been made on this movie yet. Be the first to start talking about Fences!