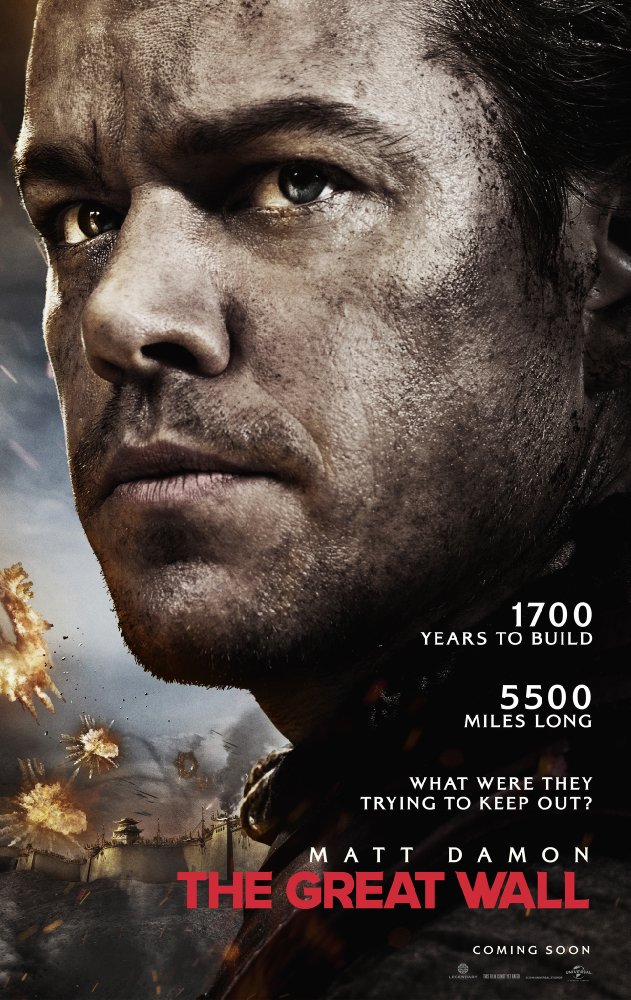 Plot: Long-held belief was that The Great Wall of China, now considered on of the new 7 Wonders of the World, was constructed to keep the Mongolian horde at bay. That is the story but what if the wall was meant to keep something else at bay, something far more sinister and evil and what of the men that defended humanity? -- Chris Kavan

Great Wall has great special effects but, much like World of Warcraft, that's about all it has going for it. Matt Damon does his best, but never rises above mediocre, and while I appreciate the whole U.S. / China joint venture, there isn't enough spark between him and Tian Jing that leads to much. Pedro Pascal, Willem Dafoe and the great Andy Lau make for compelling supporting characters, but are overshadowed by the CGI-heavy monster battles (like if LOTR met World War Z). Lots of eye candy but, sadly, not much more.

"The Great Wall" is visually pleasing to the eye, but everything else, not so much. It's a dumb blockbuster that misses the potential of being something unique. Hollywood super star Matt Damon fighting monsters on the Great Wall of China? Sounds interesting coming from Yimou Zhang, right? Well, somehow they missed the mark. That's the selling point the film is riding on Matt Damon as the star, but even Damon himself couldn't make this watchable. With the terrible accent, poorly written dialogue, and wooden character. Not just from Damon but everyone else in the movie was pretty bland. I'm quite disappointed with this.

The Great Wall has a few holes.

The most expensive movie filmed entirely in China and it's starring Matt Damon. That might rub some people the wrong way but in the context of the film, it actually makes sense. Plus I'm sure they wanted to cash in on American audiences overseas. It's a reasonable business move.
"The Great Wall" itself is an odd creature. Part historical period piece (in a foreign language half the time too!) and part Hollywood blockbuster spectacle. The setting? Medieval China. The story? European mercenaries led by Matt Damon in pursuit of gunpowder are captured at the Great Wall (duh). The Chinese soldiers there tell them the real reason the wall was built: to fend off an army of monsters. From outer space.
Yes I'm serious that's the plot.
It's actually a well made and often quite silly B-movie. …

A bit ridiculous and enjoyable at the same time

"The last time I saw you, you left me for dead. The the time before that I saved your life! "

From time to time me as film buff yearns for a brainless fantasy movie. No need to pay attention because of ingeniously crafted intrigues and ingeniously interwoven stories. The nonsense level of "The Great Wall" is unbelievably high. And at some moments, the action scenes are so exaggerated that I'm sure even the Tao Tie rolled with their eyes. Everyone knows the Chinese Wall served a completely different function. The fact that it's being used as a defense against a completely different threat, makes the story more original. I bet they've sought inspiration in Chinese fables or saga.

Asking Matt Damon to play the leading role, obviously would lead to critical reviews where words like …

No posts have been made on this movie yet. Be the first to start talking about The Great Wall!