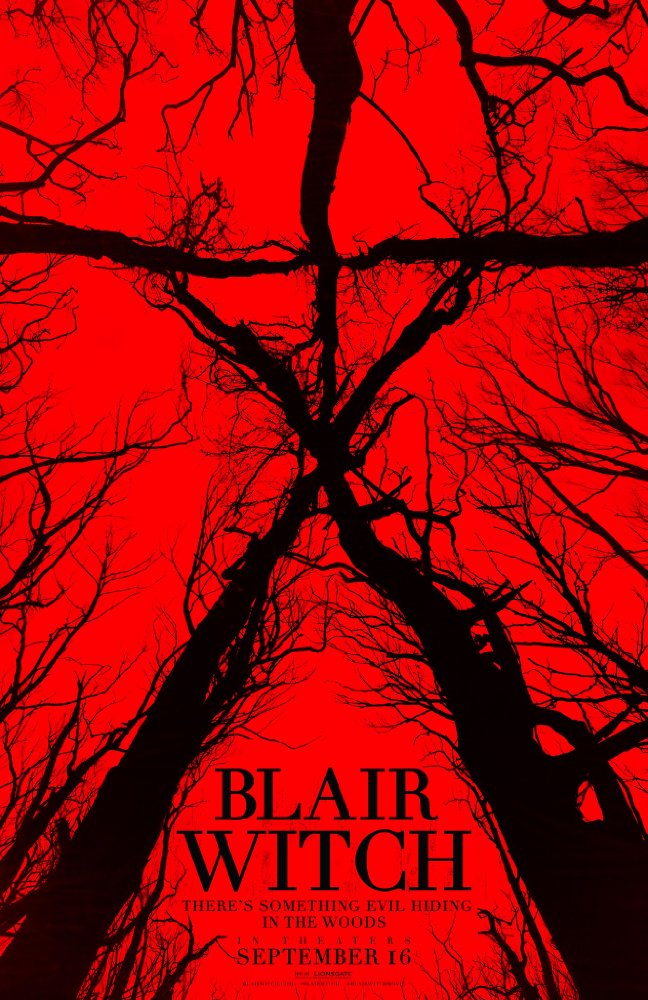 Plot: A group of college friends go on a camping trip only to discover they are far from alone in the woods. -- Chris Kavan

Forty-five minutes of boredom followed by thirty minutes of screaming followed by fifteen minutes of "wtf did I just watch?" Then I realized it doesn't matter. I still wasted my time.

This is sadly the first Adam Wingard movie that when it was over I said to myself "whatever" and moved on. 17 years of waiting to see what this thing looks like was not worth the wait. Oh and to top things off, I watched this back in September and now I just remembered it. It's not my memory that sucks, it's the movie.

You know the scariest thing about Blair Witch? The fact that the main character says he was four years old when his sister went missing - because, man, does that make me feel old. In 1999, The Blair Witch Project became the first found footage horror film (a genre that didn't really take off until Paranormal Activity) that I remember most fondly for the last five minutes - but everything leading up to it was questionable at best.

It only took 17 years, but Adam Wingard, in a bit of stealth film making (we didn't even know it was about the Blair Witch until two months prior to its theatrical debut), takes us back to the woods. This time our characters are armed with GPS, drones and walkie-talkies but, come on, you know it's not going to help. It seems all the new-fangled technology in …

'Blair Witch' is the late sequel to the massively popular/polarizing memorable 'found-footage' hallmark film. After watching this continuation, it's clear that the filmmakers only purpose was to pay tribute to the original. In that regard, you could say they succeeded. This is essentially a beat-for-beat retread of 'The Blair Witch Project' with a modern twist. It's a nostalgia trip for fans done in a way that resembles the more fast paced, constant running/screaming, and loud noise filled tropes of the current glut of 'found-footage' flicks. I like very few actual films in this recently overdone sub-genre and 'Blair Witch' does little to stand out from them besides it's strong ties to the original. When the film focuses on expanding the series' mythology and recreating that same …

No posts have been made on this movie yet. Be the first to start talking about Blair Witch!