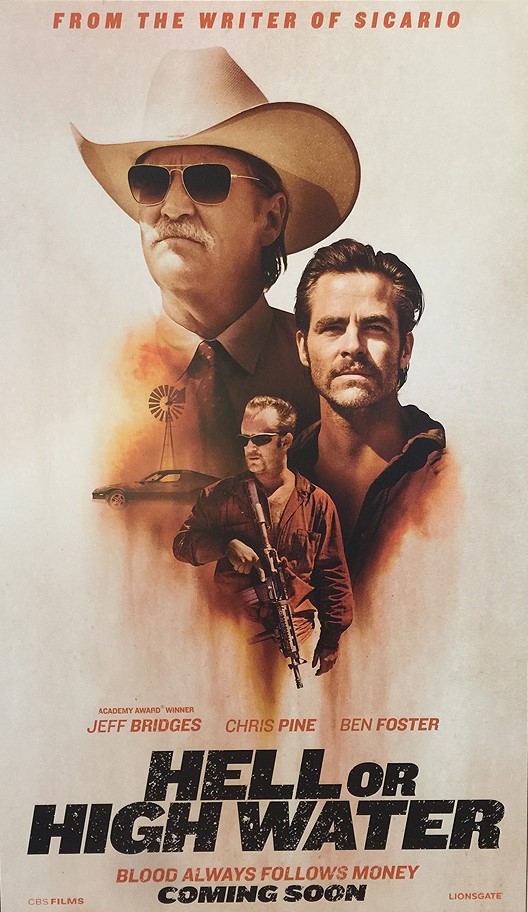 Plot: With the family ranch on the line, two brothers decide to rob the very banks looking to foreclose on their homes. Taking only small bills and using a nearby casino to change out the money, they have a few days to complete the task. A Texas Ranger nearing retirement takes up the case but as both near the end point, more than money is put on the line. -- Chris Kavan

Two brother desperately try to rob enough money to stop the foreclosure on their family ranch. Plenty of small town scenery and old-school country to go along with the gunfights and car chases.

A heated modern western with a bit of family drama, "Hell or High Water" has got to be the best mid-west crime thriller since "No Country For Old Men."

Hell or High Water is a modern western masterpiece due to remarkable performances from everyone involved. The primary roles belong to Chris Pine and Ben Foster, who portray criminal brothers, and Jeff Bridges and Gil Birmingham, who are the cops that are on their trail. Pine is the more measured brother, while Foster plays the unhinged one. Bridges is the Texas Ranger nearing retirement, and Birmingham is his long-suffering partner. I was invested in both relationships, and itâs a credit to the men involved that the tension remains ramped up high to the final moments of the film. The performances of Jeff Bridges and Ben Foster in particular I rank highly as both being some of the best of the year.

It feels appropriate that, of all the great scenes in David Mackenzieâs Hell or High Water, the one probably most fated to become iconic involves a woman telling her customers that her restaurant only serves T-bone steaks and baked potatoes. Hell or High Water is the best example in recent memory of what one might call a steak-and-potatoes movie. There is a certain breed of film that has a kind of generally appealing and unfussy quality to it. Itâs the kind of film that leads people of many different stripes to smile, reflect fondly and say, âWell that was just a very good movie.â Movies of this sort are not typically known for being conspicuously artistic nor for being the least bit cerebral. Like the T-bone steak in that West Texas saloon, the steak-and-potatoes movie is …

Hell or High Water is that rare crime drama that has a timeless appeal to it. Despite clearly taking place in 21st century Texas, it harkens back to the westerns of old. The impressive cinematography and the scenery is beautiful;proof that a dark story with mature themes does not need to look like it was shot with the lens cap on. Chris Pine and Ben Foster give great performances as two brothers turned bank robbers. Jeff Bridges and Gil Birmingham play the Texas Rangers assigned to track them down. It's a tense game of cat and mouse that is surprisingly humorous. Kudos to the script for making both sides endearing to the audience. Summer 2016 was perhaps the worst in years for movies, but this is an ideal alternative for those bored of blockbusters.

'Hell or High Water' is far above your typical "cops and robbers" flick. This masterwork of character humanizes our pro and antagonists to the point where neither are really hero nor villain. Both sides of the struggle are shown in equal measure, giving us insight into the criminals' and investigators' perspectives. The reasonings behind the robberies are substantial. They manifest an underlying topical message about the over controlling greedy nature of corporate banking. This naturally woven subtext is all in service to story and can be embraced as much as the viewer pleases. The main focus here is character. These four main players are absolutely terrific in their respected roles. We feel the same amount of sympathy and determination for each pair of opposing forces. The two …

No posts have been made on this movie yet. Be the first to start talking about Hell or High Water!