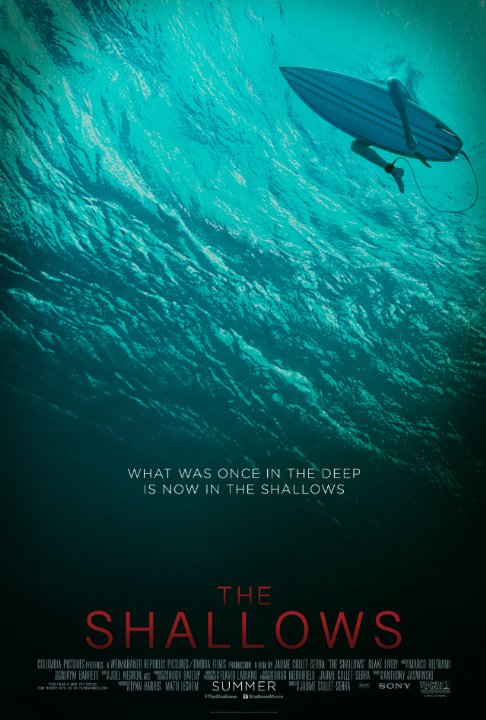 Plot: Nancy is looking forward to secluded surfing experience, but 200 feet from shore, she is attacked by a great white shark. Alone, she beings the ultimate battle of survival and will as she tries everything to make it back to the beach alive. -- Chris Kavan

More than likely, you'll go into "The Shallows" expecting a tense man vs animal, prey vs predator thriller; and that's exactly what you get.

Basically "Jaws" without the bite.

A tightly wound and thrilling example of old-fashioned B-movie filmmaking, The Shallows features a good performance from Blake Lively and some well timed scary moments. The photography of the Mexican location is downright stunning. The scares and the action are both worth watching on the big screen.

The seagull definitely deserves a nomination.

When you succeed in attracting more attention as a puny little seagull than a large over-sized shark, you deserve an honorable mention at any reputable film festival. Never before was I charmed by poultry. A confident, wounded animal and certainly pleasant company. Not even one silly word came out of his beak. A fellow victim in the same life-threatening situation. Steven Seagull was an ingenious contribution to the movie. That way Nancy (Blake Lively) wasn't compelled to talk to herself a large portion of the movie. Because, believe me, a cozy chat with the bloodthirsty shark that swam circles around her, wasn't part of her schedule.

And so we arrive at the following participant out of the …

'The Shallows' is way better than the typical shark movie. It's a self-contained thriller/survival story that pretty much never stops after the underwater threat is revealed. A short runtime and fast pace further accentuate the immediacy of the situation. Our heroine is intelligent and strong willed, making fear for her safety come easily. The events never become outlandish. There's not much suspension of disbelief needed. The movie just gets right down to business delivering some tense encounters. It's all pretty entertaining. Some scenes overreach when attempting a '127 Hours' type of emotion. I was locked into the action at every turn, but the character moments were not as investing. Blake Lively holds the movie together serviceably well. Nothing here really goes above and …

Favorite Shark Movies by The WHB

No posts have been made on this movie yet. Be the first to start talking about The Shallows!