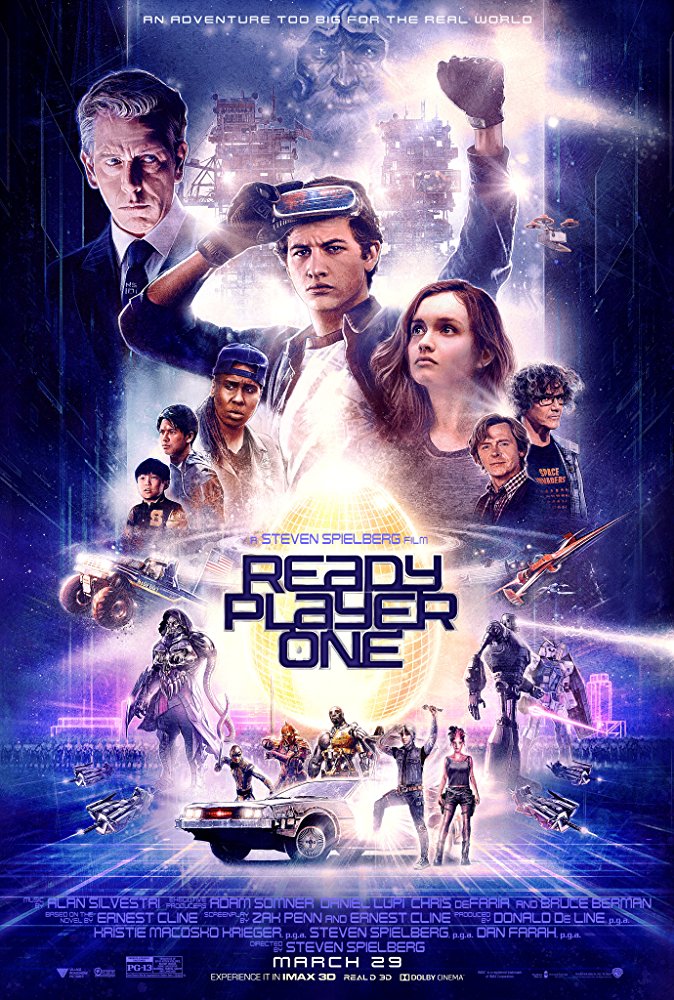 Plot: In the not-too-distant future the world has become stagnated and the "missing millions" generation finds release in a massive VR MMO called "The Oasis". When the billionaire founder of the game dies, it starts an in-game Easter Egg hunt, steeped in 80s pop culture, with the prize being his entire fortune and the future of Oasis itself. Young outcast Wade Watts finds himself in the center of the hunt, and with corporate-backed zealots willing to do anything for the prize, Watts will have to put everything on the line to win - and maybe change the real world for the better. -- Chris Kavan

While it's certainly modern, technically impressive, and conceptually ambitious, "Ready Player One" is an exhausting love-letter to nostalgia and pop-culture that's overstretched to a punishingly excessive length.

I loved Ready Player One! Steven Spielberg's dazzling and entertaining trip to the past and the future is one of the best popcorn films I've seen in years. It's a thrilling, visually breathtaking roller coaster ride with colorful characters, a wonderful and engaging story and a truthful message at the center of it all. It's a world built and fleshed out beautifully by Spielberg, and by the end you'll wish you were able to be part of the fun. This is, in my opinion, Spielberg's best film in over a decade.

This is no ordinary sci-fi movie. It has the humor that all successful action flicks out there, and a clear message all melodramas had. I enjoyed this film not because of the graphics and the whole idea of a virtual reality. I enjoyed it because of all the pop culture I can relate to were introduced not in a cheap or mocking way. The irony is, it is a movie marketed and appeared to be appealing to the younger generation who may not have a single idea of all, or at least most, of the references.

So I finally got around to see 'Ready Player One' and it was a perfectly fine. It's got some cool set pieces and the first race scene at the beginning was a chaotic thrill ride.

I've been hard on Steven Spielberg recently as I'm not always sure why he directs certian movies, and my perspective still hasn't changed yet.

Tye Sheridan is more indie than a leading man in a massive blockbuster. Great actor, but the directors he's been working with don't know what to do with him. Olivia Cooke entire character conflict with her appearance because of a birthmark on her face was laughable. Like she's freaking gorgeous. It's shameful to see The Iron Giant being turned into a killer weapon despite going against the powerful message in his own movie.

It's bloated, but still pretty enjoyable.

"Ready Player One" by Yoijimbo

In a near-future world where the disenfranchised and downtrodden spend all of their time in a virtual reality gaming system, an ordinary kid attempts to solve three challenges that will give the winner ultimate control over both it and the most powerful corporation in the world.

Steven Spielberg's latest fantasy opus is essentially Charlie and The Chocolate Factory for the digital generation. The most obvious reference points are The Matrix, except the population are absorbed into the artificial reality out of "choice" - making their subjugation rather more subtle in its approach - and of course the original "lost in cyberspace" children's adventure Tron with Ben Mendelsohn's corporate douche bag very much in the same mould as David Warner's. It allows for a few sly digs at the …

No need to say I was thrilled.

James Halliday saw the future.
And then he built it.
He gave us a place to go.
A place called â¦ THE OASIS.

Recently I got a Playstation VR set for my birthday and since then Iâve spent a lot of hours in different virtual worlds. So I understand very well that in films such as Ready Player One the population spends more time in this artificial environment than in the actual world. As one already suggested at the beginning, this virtual fantasy world is alluring because thereâs so much to experience. But also because you can be so much. Just like in â2047: Virtual Revolutionâ, it seems as if all of humanity has lost its contact with reality and is wasting their entire fortune on digital upgrades and gadgets and spend all their free time walking around in futuristic-looking …

No posts have been made on this movie yet. Be the first to start talking about Ready Player One!