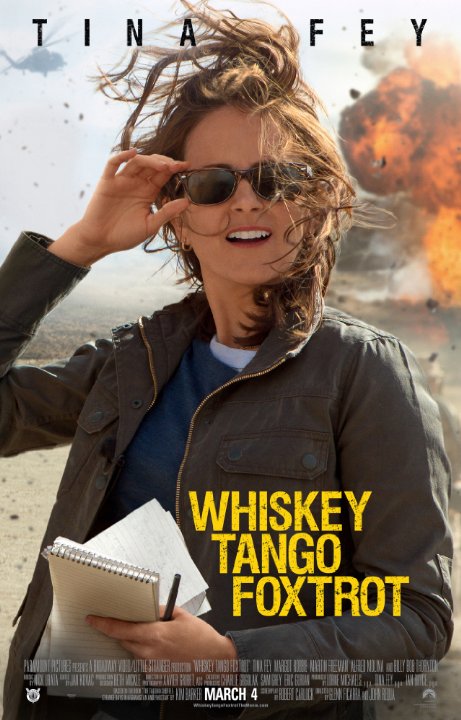 Plot: Wanting to escape her boring desk job, a journalist takes an offer to report from Afghanistan during Operation Enduring Freedom. Once there she meets a fellow female reporter while making bad decisions with a war time photographer and finding out reporting from a war zone is not always black and white. -- Chris Kavan

With some humor thrown in, Tina Fey becomes another comedy icon to take on a semi-serious role.

WHISKEY TANGO FOXTROT has a cast of good actors having a good time. But the script is too messy and uneventful for the movie as a whole to be considered a good time. Also, for a movie billed as a comedy it is surprisingly grim and serious at times.

Pretty entertaining and gratifyingly non-preachy for a war movie, but not as funny or engaging as I had hoped it would be. Also, totally unafraid to truck in offensive and outdated arab stereotypes.

'Whiskey Tango Foxtrot' is a biographical piece based on one woman's on-site reporting from the beginnings of the Iraq war. This drama/comedy handles each of those facets in equal measure. The comedy comes from this woman's personality and the many relationships between all of the characters, while the drama never loses it's grasp on the realistic consequences of war. The balance is so strong that it will switch between the two sides in a single scene with ease, giving us more to be invested. I had some genuine good laughs and felt some emotional involvement. Tina Fey gives an engaging lead performance that might be her best yet. She even elevates everyone else around her. That is, except for the individuals that stick out from the rest. A few characters seem a bit forced in the …

No posts have been made on this movie yet. Be the first to start talking about Whiskey Tango Foxtrot!